UK to announce new rules for militants after street stabbing 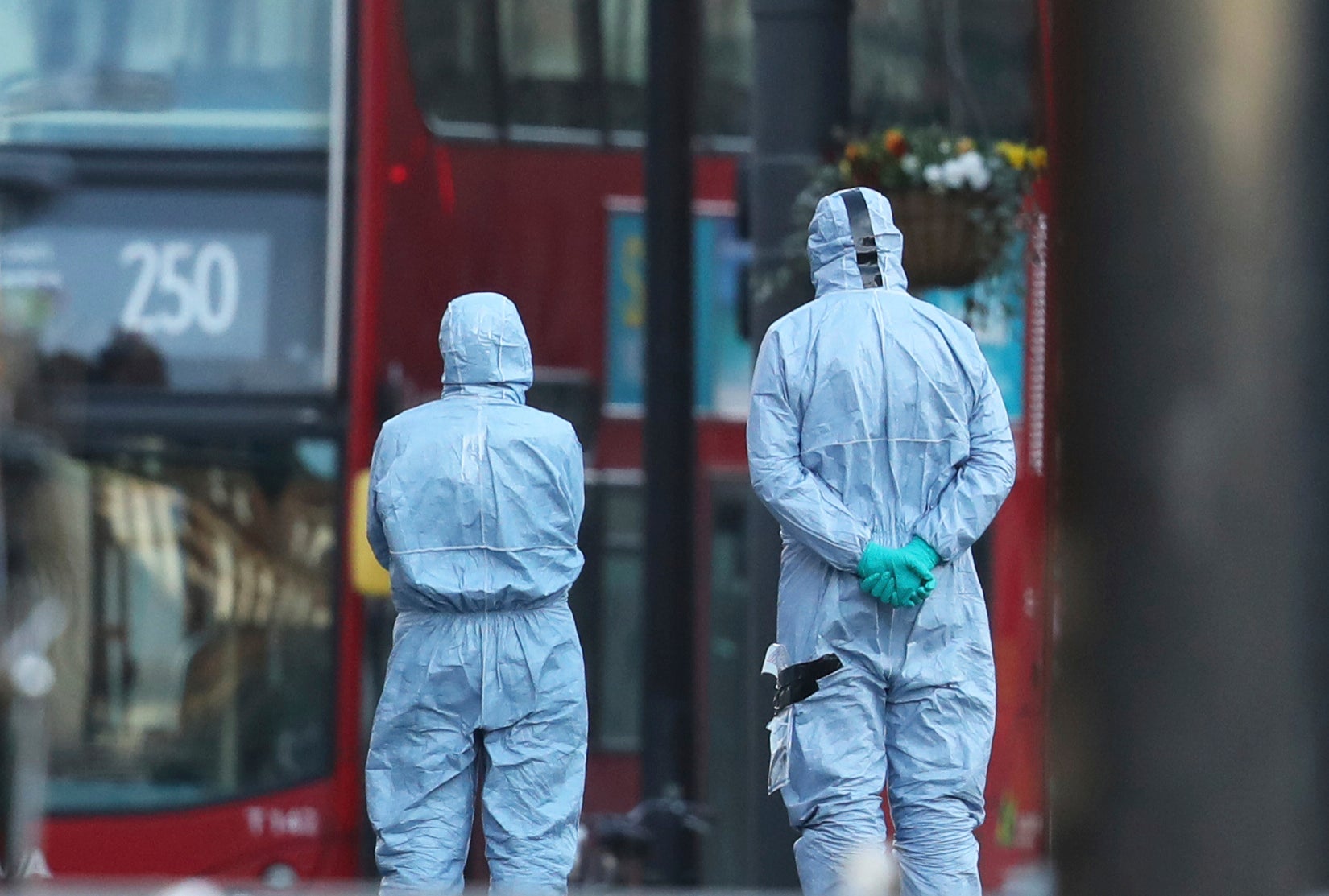 Police forensic officers work at the scene following a terror stabbing attack in the Streatham area of south London Monday Feb. 3, 2020. Police in London say the man identified as 20-year-old Sudesh Amman was wearing a fake bomb and stabbed two people Sunday before being shot to death by police was recently released from prison, where he was serving for terrorism offenses.(Aaron Chown/PA via AP)
by: DANICA KIRKA Associated Press
Posted: Feb 3, 2020 / 06:44 AM EST / Updated: Feb 3, 2020 / 06:44 AM EST

LONDON (AP) — The British government plans to announce new rules for the imprisonment of convicted terrorists after an Islamic militant who was recently released from prison stabbed two people in south London, the second such attack in less than three months.

Home Secretary Priti Patel, who is in charge of the police, said the government would release its plans Monday. Following Sunday’s attack and a Nov. 29 attack in which two people were killed in central London, the government said it would effectively stop the early release of convicted extremists, double terror sentences and overhaul the conditions under which they are released back into the community.

The government will be “announcing some fundamental changes, in addition to what we’ve already said, that we will do to deal with counter-terrorism and counter-terrorist offenders,’’ Patel said late Sunday.

A man police identified as 20-year-old Sudesh Amman strapped on a fake bomb and stabbed two people on a busy London street Sunday before being shot to death by police.

Deputy Assistant Commissioner Lucy D’Orsi said Amman had been convicted of publishing graphic terrorist videos online and had stockpiled instructions on bomb making and knife attacks. Police on Monday continued to search a hostel where Amman had moved into less than two weeks ago.

Officers had been trailing Amman at the time of Sunday’s attack, D’Orsi said, but were unable to head off the bloodshed in the commercial and residential south London neighborhood of Streatham, where Amman struck outside a major pharmacy on a busy shopping afternoon.

The incident in London recalled a November stabbing attack carried out by another man who had served prison time for terrorism offenses. Two people were killed in that attack.

Counter-terrorism officials have warned of the threat posed by militants unless the government couples prison sentences with effective de-radicalization programs. More than 70 people convicted of terror offenses have been released in Britain after serving time in prison and more than 200 others are currently in prison convicted of terrorist offences.

“One of the questions I’ve got for the government is what are we doing about those 70-odd people who have been released from prison?” he asked.

The former head of UK counter-terrorism policing, Mark Rowley, told the BBC there was some logic in giving convicted militants indeterminate prison sentences.

“One of the challenges for the prime minister and his team is how much he can look back and amend the rules for people already serving sentences,” he said. “Legally that’s very, very difficult. But if there are many, many coming out on regimes that we no longer think work, is it possible to change that?”

Rowley said unless current law was changed “police and security services are going to have many, many more cases that they are prioritizing.”