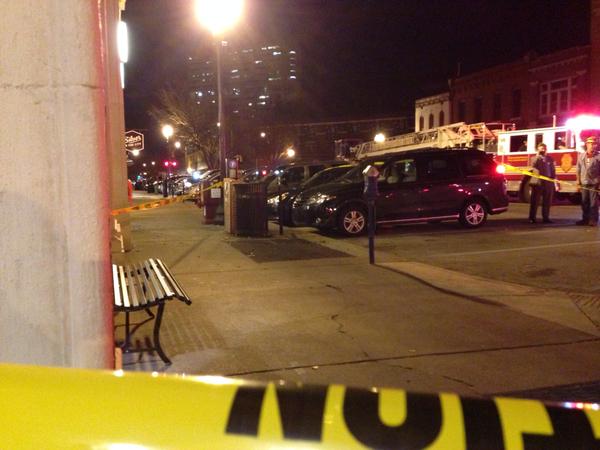 INDIANAPOLIS (WISH) — An explosion under a grate on Massachusetts Avenue Monday night was caused by a faulty cable on a transformer, according to IPL. With Indianapolis set to host the Final Four in just weeks, the utility company is stressing that public safety is top of mind.

IPL said the transformer had just been inspected last October and the only issue found was a minor amount of rust. But around 8:42 p.m. Monday, the transformer exploded.

IPL engineer Mike Holtsclaw said when the cable faulted, electricity arced over to a compartment containing 18 gallons of a non-combustible fluid that had a small air pocket. That caused the fluid to heat and expand.

Holtsclaw said that would have sent smoke or vapor up through the grate. As for reports of flames, he said the electrical arc could have caused a flash.

One witness said it sounded like a cannon going off.

Colin Claerbout had just taken a picture of his girlfriend silhouetted against the downtown skyline as they sat outside Bru Burger when the peaceful night was disrupted.

“All of a sudden there was this booming explosion. It was clearly an explosion,” he said. “I actually saw kind of a flame off a reflection of the front windows of a building really quickly from the direction we heard the explosion.”

IPL says the incident was over within half a second and no one was in danger. But the Citizens Action Coalition believes with an aging infrastructure that won’t always be the case.

“We fear that it could be a safety issue – It could potentially harm someone and we believe IPL should bear the cost of these infrastructure improvements,” Lindsay Shipps, an organizer with the Citizens Action Coalition said.

Shipps said the Coalition has documented 14 such incidents in the last decade. IPL said it does everything it can to make sure things like this don’t happen and takes steps to minimize the risks if such an event does occur.

“I believe we are probably more risk of something happening driving into work each morning than walking down the street downtown,” Holtsclaw said.

Claerbout says it’s a bit concerning to know this wasn’t an isolated incident but isn’t too worried.

“I’m probably just going to go about my business and try not to worry about it,” he said.

Holtsclaw said the utility company will do additional inspections on equipment in the areas of the various Final Four venues just to make sure everything is ready to go for the event and also putting extra staff in place.

As for this transformer, it was immediately shut down and will be replaced later this week.