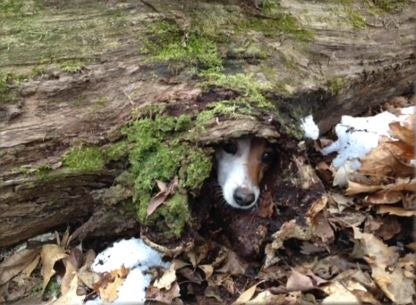 DECATUR, Ind. (WANE) – When it was time for Phylis Whitright and her husband to wrap up their afternoon walk with their dogs Ike and Lou in tow, something was wrong.

“We yelled for the dogs and Ike came running but Lou never did,” Whitright said.

The 9-year-olds don’t need leashes and stay close to their owners. But it seemed Lou’s Jack Russel nose took him somewhere else and they couldn’t find him.

“He was nowhere. So we looked all over the place. We searched the woods, everywhere,” Whitright explained.

After a couple hours, they had to take a break. When they came back, still no Lou. They called the sheriff’s department, reached out to friends and posted on social media. But then, the day was coming to an end.

“We came back home and of course I was crying the whole time. Could barely sleep,” Whitright said.

The next day they went back to look again. They weren’t having any luck. Until, Lou’s brother, Ike, lead the search. Ike went inside a fallen down tree, and there he was.

“I looked down and there’s a little hole there and here Lou’s face was sticking out,” Whitright said.

Stuck, unable to move or really even bark, 24 hours later Lou was rescued. “I said ‘oh my gosh, I found him. I found him! Lou’s alive!'”

Now the family is safe and back together. And the credit, goes to Ike.

“Ike is the one who went down in that log and looked for him so he’s our hero,” Whitright said.

Lou’s family wants to make sure they thank everyone who helped including the sheriff’s department and their friends. As you can imagine, it meant the world to them.