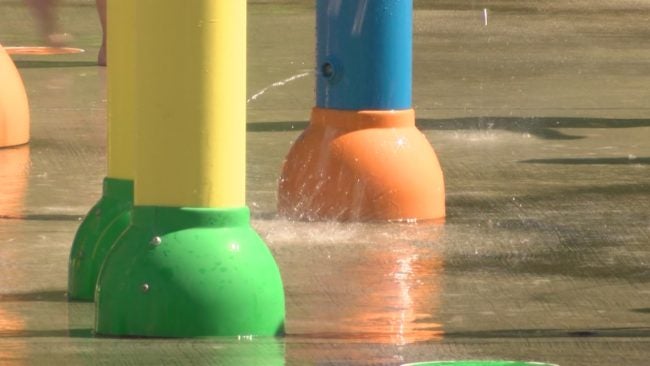 GREENWOOD, Ind. (WISH) — An Indianapolis woman said she has fired her babysitter after seeing a cell phone video showing gallons of water being dumped on her seven-month-old baby .

The Greenwood Police Department and the Department of Child Services are investigating the incident. It happened Wednesday at the splash pad on Lincoln Street in Greenwood.

Brittany Dixson said she was absolutely mortified after seeing that video for the first time. She said she doesn’t think she can trust anyone with her baby ever again.

“It’s terrifying to think that somebody could do something to your daughter, somebody you trust to watch your daughter at any moment of time,” said Dixson.

The cell phone video has been shared thousands of times on Facebook.

“My newsfeed was lit up, there’s was posts everywhere like whose baby is this,” said Dixson.

Dixson told 24-Hour News 8 in a phone interview she saw the video at work.

“When I first saw the video it was just like why would you put a child underneath so much water at once?” she asked.

She quickly realized the baby in the video was her daughter Annora and the woman standing next to her in the purple, her babysitter.

“It’s just really stressful to think about somebody would do that to her no matter how many times you put a child under water,” she said. “They’re not going to like it and they’re going to cry every time.”

Dixson said she messaged the lady who shared the video on Facebook. That woman told her she was so concerned for the well-being of the baby and what she witnessed.

Dixson confronted the babysitter when she picked her daughter up.

“You allow that to happen, you allow to let her walk on her barefoot on the hot cement, you swing her high up on the swing multiple times,” she said.

Dixson told the babysitter she won’t be using her again.

“She was basically apologizing to me the whole time telling me how she’s so sorry, she really didn’t know that was the bucket that had the most water in it that dumped on her,” she said.

Worried about her daughter, Dixson took her to the emergency room to get checked out. Doctors told her Annora could have had dry drowning.

“She could have inhaled so much water once she went to sleep that night she could have actually drowned in her sleep because the water would have been trapped in her lungs,” she said. “But she didn’t have any water in her lungs or anything like that but he said that was a major possibility and he’s glad that I brought her in.”

Despite what happened, Dixson said she forgives the babysitter for what she called poor judgement.

24-Hour News 8 could not reach the babysitter to get her side of the story.