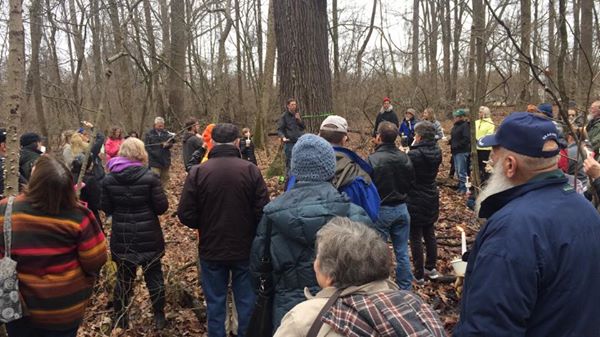 INDIANAPOLIS (WISH) — Nearly 15 acres of trees are scheduled to be cut down at Crown Hill Cemetery.

The VA purchased the land in 2015 to build a memorial and cemetery for veterans.

Deep within the trees of the crown hill forest Monday evening dozens of people spoke about what the forests of Indiana mean to them.

“The trees support a larger ecosystem,” he said.

The forest is also a major part of history having been here long before our country was formed.

“We inventoried the trees and there’s hundreds of trees,” he said, “Some of the largest trees in the city of Indianapolis are here in this forest.”

“It’s reported the trees are up to 500 years old in this forest,” he said.

He spoke at the protest along with others who hope the VA at least considers a different place for its memorial.

“We want to show the public and show the owners of the forest, the Veterans Administration, that we think that these trees should be saved, this forest should be saved, and it’s a valuable asset to our city,” he said.

Disabled Veteran Jeff Piper would rather see these trees stay put than a memorial built.

He would like to see other areas of the Crown Hill property be utilized before they deforest the northwest corner.

“I agree, build a monument, we can do something cool out here, but not at the expense of those trees,” Piper said.

“There’s open field right next to this pristine forest that has plenty of space,” Delbridge said.

But the VA bought the forested section of the property and hasn’t budged on its plans.

So the environmentalists are worried the days of gatherings like the one Monday are numbered.

Last week a U.S. District Court judge denied an injunction request by the Indiana Forest Alliance and other groups to stop the deforestation.

There’s also an offer on the table by a charitable trust to buy the land back from the VA.

They’ve not gotten a response yet.