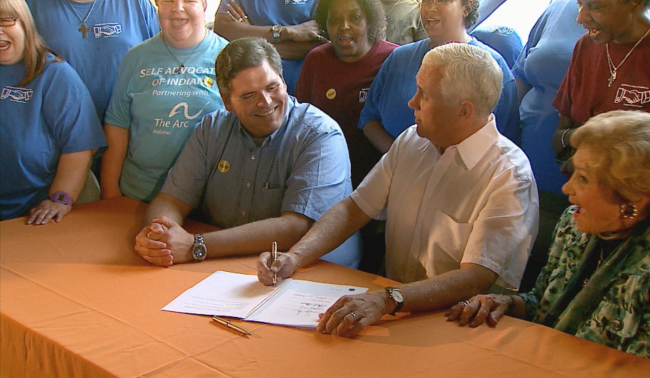 This is all about the “R” word.

It’s a term that was once considered appropriate, but is no longer: retardation.

“No one wants to be called retarded,” said Melody Cooper of Self Advocates of Indiana. “Nobody.”

Cooper says it happened to her in high school and earlier this year she testified in favor of the new law.

As a result, she got to introduce Mike Pence at the bill signing.

“I wanna be able to celebrate with all of you,” said the governor, “that your voices have been heard.”

The new law means that retardation will be replaced in the Indiana code by two words: “intellectual disabilities.”

And the bill signing is the end of a process that included unanimous support in the General Assembly.

“Because people with disabilities,” said Kim Dodson of the Arc of Indiana, “really want the respect that every citizen in the state of Indiana has.”

That is, something that isn’t considered an insult.

Advocates say that the state of Indiana has been good about passing bills to protect the rights of the intellectually disabled and to give them educational and economic opportunities.