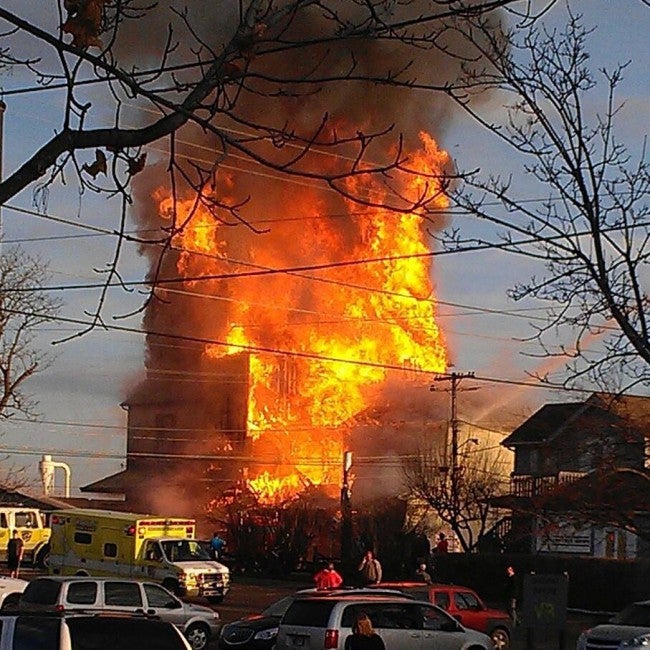 Firefighters were first alerted around 7:30 p.m. to the huge blaze on Main Street. Multiple fire departments from around the area were called to assist.

Fire officials said the old mill was being used as storage for a lumber yard.

The first arriving firefighters found the building fully engulfed in flames. Thick, dark smoke could be seen for miles as it towered into the air.

Utility crews cut power to the area because of lines running near the building and to protect firefighters operating aerial ladder trucks. Indiana Michigan Power reported 162 customers without electricity. As of 4 a.m. Wednesday, I&M was no longer reporting any outages.

Northeast Fire Department Lieutenant Kris Miller said crews started removing lumber from the area to help control the flames and see what they are working with inside.

Miller said the size of the building and the fuel (lumber) was the biggest hurdle in fighting the flames. Three ladder trucks were being used to help douse the flames.

Firefighters also sprayed water on nearby structures to prevent them from catching fire. Officials have not commented if any other structures were damaged.

Miller said officials do not believe anyone was inside the building when the fire started.

Crews were expected to remain on scene overnight to put out remaining hot spots and begin overhaul of debris.

Several streets surrounding the fire were closed. No injuries were reported. The cause of the fire is under investigation.