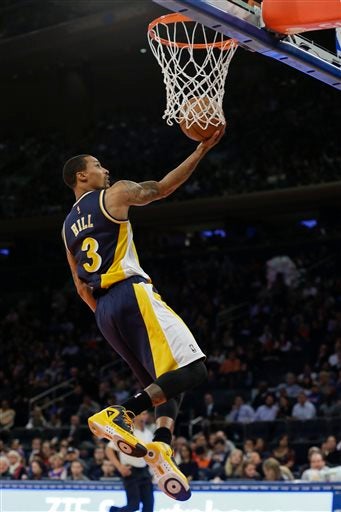 George Hill led the Pacers (35-43) with 20 points. Roy Hibbert had a double-double with 11 points and 11 rebounds. The win tied the Pacers with the Miami Heat, one game off the final playoff spot behind the Boston Celtics and Brooklyn Nets.

The Pacers road a suffocating defense that held the Knicks to 34.5 percent shooting and outrebounded New York 54-34.

The Pacers set the tone in the first half, going into the locker room with a 54-38 lead. Indiana held the Knicks to 31.7 percent shooting from the field and owned the boards as the Pacers outrebounded New York 31-18.

It didn’t get any tighter in the second half.

Chris Copeland had surgery on his elbow and his abdomen, coach Frank Vogel said before the game. Copeland sustained the injuries in an early-morning incident when he, his girlfriend and another woman were stabbed following an argument on the street near a Manhattan nightclub that also led to the arrest of two Atlanta Hawks players, authorities said.

Pacers: Vogel discussed Paul George’s role going forward for the rest of the season. “We’re evaluating him on a game-by-game basis,” Vogel said. “We’ll keep the same, a similar rotation, about 10-15 minutes total; five to seven minutes a half and we’ll take it from there.” George had 10 points in 15:31 of play Wednesday night.

Knicks: New York continues to struggle starting games. The team has now scored less than 17 points in the first quarter four out of the last seven games. … Carmelo Anthony sat behind the bench tonight for the first time since he underwent knee surgery.

Pacers: Indiana is at Detroit on Friday.