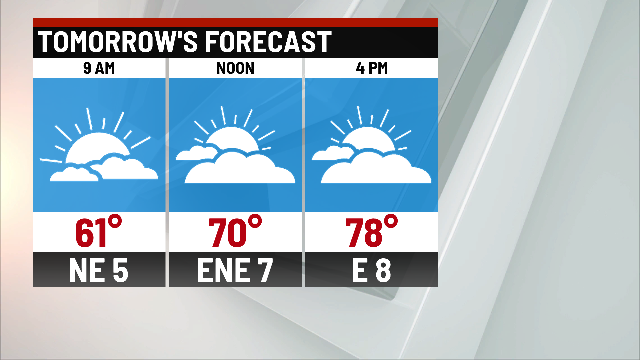 INDIANAPOLIS (WISH) — Another round of patchy dense fog is possible, overnight.  Pattern remains quiet for the second half of the work week.

Mainly clear to partly cloudy conditions for the evening and early overnight.  Like last night, fog is possible- although it won’t be quite as widespread as early this morning.  Still, a few areas may have to deal with lower visibility for the morning commute.

Lows dip to the middle to upper 50s.

Beautiful day on tap, with a mixture of sun and clouds with highs topping out in the upper 70s.

Temperatures finally surge back to above normal levels, with highs in the lower to middle 80s by the afternoon.

Florence remains a strong category 4 storm, with winds up to 130mph.  No change in the track, as it looks to take aim somewhere between the North Carolina/South Carolina line, and Hatteras by late Thursday/early Friday.

Relentless winds, along with potentially devastating storm surge will be the first issues as Florence comes on shore.

The next, and possibly bigger issue, will be the continuous rain slated for much of the Mid-Atlantic as the storm works inland.  With little movement once the storm is on shore, some areas could pick up 20″+ of rainfall, which could lead to catastrophic flooding for the region.

Quiet pattern for us through the weekend.  An adjustment comes with the remnants of Florence potentially making an impact to central Indiana Monday and Tuesday.  Recent model runs have hinted to this fact, but with still several days ahead of us, this could change a bit.  But with several models are board with this solution, it’s at least worth a mention for the possibility of showers to open up the work week next week.