Plane Crash Pictures: Why images were so easy to get 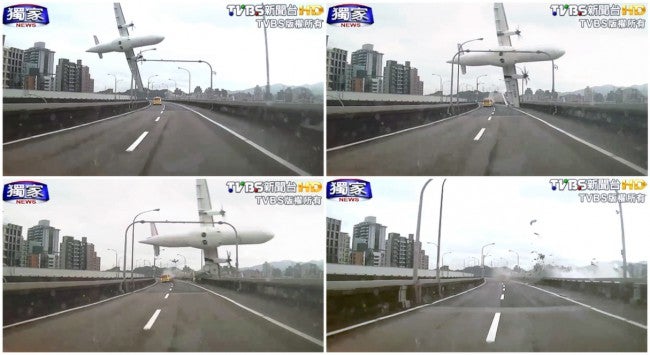 TAIPEI, Taiwan (Media General) – The images are shocking and quickly spread around the world. Dash cam captured the moment a TransAsia Airways plane crashed into a shallow river in Taiwan’s capital of Taipei. Late Wednesday, rescuers continued to scour the river searching for people who remained missing. Some survivors were rescued, but the crash killed at least 25 people.What can be seen?

Flight 235 had 58 people on board. Many were travelers from China. In the video caught on dash cam, the flight could be seen banking sharply on its side after takeoff from Taipei. It clips a highway bridge and then careens into the Keelung River.

The video shows the ATR 72 propjet as it pivoted onto its side while zooming toward the traffic bridge over the river. In one of the videos, the plane rapidly fills the frame as its now-vertical wing scrapes over the road, and hits a vehicle before heading into the river.Dash cams are popular

The video was quickly made available to authorities and the media. It immediately spread around the world. According to Iris Shaw, Senior Associate with the Taiwan Democratic Progressive Party Mission in the U.S., dash cams have become very popular in Taiwan and China in the last few years. In fact, in Taiwan, the traffic police will consider the dash cam videos as evidence for accidents and disputes.Dash cams may become law

On January 7 of this year, a new amendment was proposed to the “Road Traffic Management and Penalty Act”. The amendment would fine drivers who did not install dash cams or make sure his or her dash cams operated properly.

There are also web sites set up for Taiwanese to easily share dash cam videos. The dash cams are also manufactured for scooters and bikers in Taiwan as well.