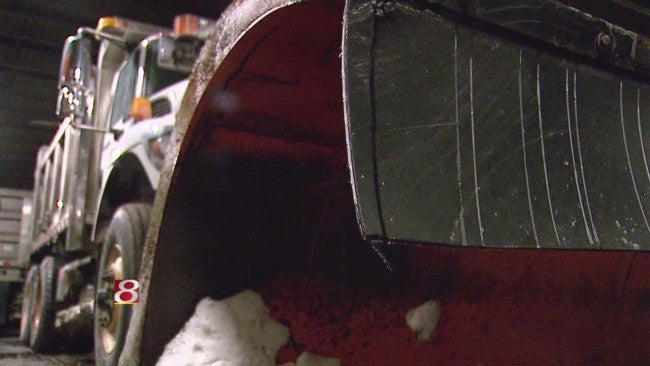 INDIANAPOLIS (WISH) – Plow drivers in Indianapolis are armed and ready for the worst.

The Department of Public Works has 90 plow drivers – its full fleet – throwing down salt and clearing snow from 11 p.m. Friday through 11 a.m. Sunday. Drivers will work 12-hour shifts.

It’s another round of winter weather that has some people already looking forward to sunny skies and warmer temps.

In the dead of winter, bikes couldn’t look more alive at the Indiana Motorcycle Expo.

The vintage variety gets Adam Ratcliff’s motor running. He hosts the Rockers Reunion, a vintage motorcycle show, scheduled in May.

“They just have a certain, certain panache about them,” he said.

Just don’t ask him to take them on the road this time of year since salt can damage them.

“These are pretty hearty motorcycles and once it thaws out, they’re going to run just fine,” he said.

The motorcycles might be a bit out of season, but plow trucks are more than capable of handling the roads this time of year.

“They all have two ton salt beds, they’re all equipped with the same salt spreader,” said Scott Manning, DPW spokesman, as he showed 24-Hour News 8 a garage filled with trucks.

Armed to the teeth and customized to handle whatever Mother Nature drops on them, the massive plow trucks are ready to go 12 rounds with possibly the biggest snow event this winter.

“We really do approach it as kind of a fight or a battle if you will because it’s not just snow accumulation itself. It’s wind conditions, it’s air temperature, it’s pavement temperature,” he said.

Maintenance crews spent the day inspecting and tuning them up. It’s why every piece of DPW equipment is in service.

“It’s just really important for us to make sure that everything’s in good shape because it’s a scenario where we’re really fighting snow around the clock,” Manning said.

The plow trucks are workhorse, built to fend off old man winter. But the two wheeled wonders at the expo will just have to wait.

“You never know in Indiana,” said Ratcliff. “You know I’ve had times in this time of year where it’s 72 degrees out. You just don’t know.”

Besides city plow trucks, contractors are on standby to take care of the side streets. They’ll be sent out if the snowfall hits six inches. Although they’ll plow the side streets, they do wouldn’t throw down salt.