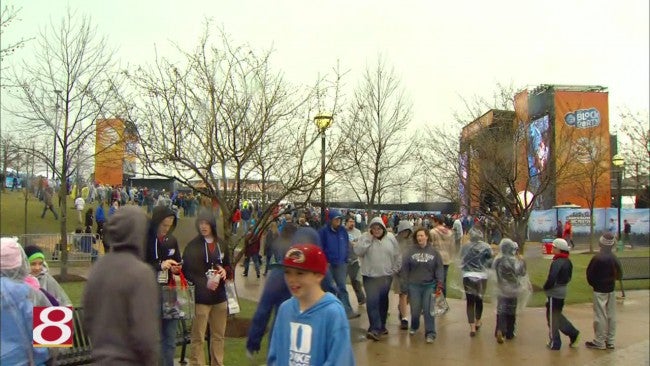 Unfortunately, some of those fans also became victims of pick pockets.

Several people filed police reports this weekend after discovering their wallets had been taken. Police say whenever you’re in a big crowd, you have to be on guard.

Thousands of basketball fans visited Indianapolis this weekend for the Final Four.

Unfortunately for Tom Hatton of Clarksville, that experience cost much more than the price of a ticket.

“I reached in to get my cell phone and I noticed that there wasn’t anything in my pocket, I didn’t realize my wallet was gone,” he said.

He was one of at least eight people who filed pick pocket reports to Indianapolis Metropolitan Police Department this weekend at various places downtown.

“When I was giving my report there was another fella down there and he’d been pick-pocketed also,” Hatton said.

In big cities it’s not uncommon.

Wilburn said it’s not uncommon to have a spike in these crimes when so many people are in close quarters.

“People are not necessarily cognizant of what goes on around them because they’re actually having fun which is a good thing,” he said.

But he also recommended trying to maintain a level of awareness.

“Go in small groups, have somebody kind of watching that you’re not clustered in an area or setting your belongings down,” Wilburn said.

Hatton lost about $800 in cash when his wallet was stolen at the game.

Wilburn recommends not carrying large amounts of money when you’re in crowded areas.

“Only carry that which is necessary,” he said.

Hatton said he learned an expensive lesson from this experience for the next time he goes to a game.

“My bill fold and wallet will be in my hip pocket next time and I will not be carrying much cash with me that’s for sure,” he said.

Officer Wilburn said it’s very difficult to get money back for victims of pick-pocketing, but it’s always a good idea to file a police report.

He said they do have uniform and plain clothed officers in the crowds keeping an eye out during events like this weekend.