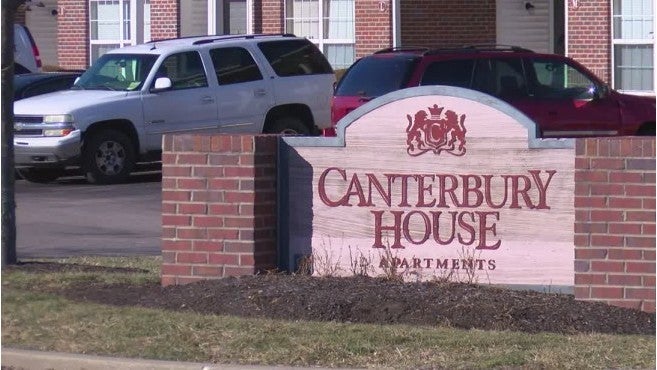 LAWRENCE, Ind (WISH) – A suspect is on the run while a 22-year old man is dead after a shooting in Lawrence early Wednesday morning.

Investigators said they don’t believe the shooting was random; however, they still consider the suspect dangerous. They’re asking for the public’s help in tracking down the person responsible.

Poilce went to the 7900 block of Queensmead Drive at the Canterbury House Apartments shortly before 2:30 a.m.

At the Canterbury House Apartments in Lawrence, the remnants of Christmas aren’t tough to find. But, the holiday spirit was lost when police found the body of 22-year old Aaron Grice behind a dumpster.

“Another shooting over here. This violence needs to stop,” Shervaugn Wilson said.

Wilson knows better than anyone. Her 23-year old son, Dalon Wilson-McIntosh, was murdered six months ago in a double homicide.

“He didn’t deserve to die. Innocent bystander, just playing basketball with his brother,” she said.

Three dead in two separate incidents both happened at the Canterbury House Apartments. Police have yet to identify any suspects, let alone make arrests.

“Each one is unique in its own right. If we saw a common thread, we’d be addressing that already. Each one stands alone as its own investigation,” said Lawrence Police Department’s Chief Deputy Gary Woodruff.

In Grice’s shooting death, police said by the time they arrived on the scene he was already dead from at least one gunshot wound. There were no witnesses around and nobody has come forward with information.

“If we can get specific information that can put them on the right path, that can help bring resolution much quicker and help build a strong case,” Woodruff said.

One single tip, police said, could be the difference between a dangerous suspect on the loose or closure for grieving families.

Police said they do not believe that Wednesday’s homicide is connected to the double homicide from June. If you have any information, call Crime Stoppers of Central Indiana at 317-262-8477.

Wednesday’s homicide was the seventh in Lawrence this year.