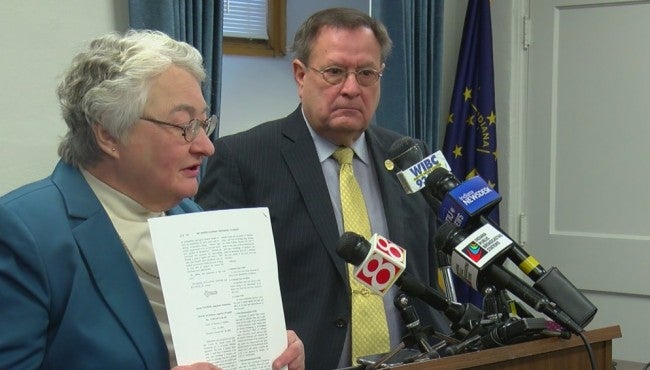 The final hate crime bill alive in the Senate died Tuesday morning in a committee chairman’s decision that shocked some supporters.

After years of trying, lawmakers announced they could not agree on a bias or hate crimes bill. State Senate Pro Temp David Long, a Republican from Fort Wayne, said, “Some don’t agree on the methodology utilized or the language or whatever, but, we’re much closer, I think, than people realize to getting something done. I personally support moving forward with the idea.”

The bill itself died because Republican State Sen. Susan Glick, from LaGrange, said some lawmakers believed the bill did not go far enough, while she said others thought the current law just needs a little nudge.

Glick said one of the sticking points lawmakers could not agree on was gender identity.

Glick said, “I think the list of characteristics was all-encompassing. I really believe people read that list and see in parens, in their minds, it only applies to this race or this religion or these people. In fact, all of us have a a gender identity. All of us have a sexual identity.”

“We do have a way to enhance a sentence for someone who has committed a crime against someone, for whatever bias they hold,” he said.

Byron Ratcliff, the state criminal justice chair of the Indianapolis NAACP, said, “It’s a shame. They ought to be ashamed.”

He added, “I didn’t believe it was going to happen, but it did.”

Ratcliff said, “Only five states in the Union don’t have a bias or hate crimes bill. Why is Indiana one of them?”

“I believe our ability to reach a compromise on this language in the future may come sooner rather than later,” she said. “But, I think we’re not there yet.”

Why can’t lawmakers perhaps model an Indiana bill after one of the other 45 states with similar laws on the books. Long and Glick said other states rules were “all over the map,” and aren’t as helpful as they initially thought.

Democrat State Sen. Greg Taylor, from Indianapolis, said also had a bias crimes bill going, but that bill is now dead, too, his rep said.

About the committee’s decision, Taylor said in a statement:

“I am more than disappointed and angry on behalf of victims in this state that another year has gone by and the General Assembly has chosen not to put a law on the books to protect those who are affected by bias motivated crimes.

“A bias crimes bill was part of the Indiana Senate Democrats’ legislative agenda and our efforts to get this bill passed will not be stopped because of the inaction of one committee.

“I was told on the Senate floor last year that a bipartisan effort would be made to ensure a bias crimes law would be passed this legislative session. Those conversations ended when session began.

“The courageous families who came to the Statehouse to tell the stories of the crimes that have been committed against their loved ones because of a bias, were ignored when the chairman of the committee failed to hear this bill today.”

“I am exceedingly disappointed that the legislature has again failed to act on a hate crimes bill.” Curry went on to say “Hate motivated crimes will continue to occur in our state. How we collectively identify and address those crimes should be clear and direct. We will not tolerate the targeting of fellow individuals due to their race, religion, sexual orientation, or other characteristic.”

State Rep. Cherrish Pryor, a Democrat from Indianapolis who chairs the Indiana Black Legislative Caucus, said, “Today, the people of Indiana were let down.”

She added, “The Senate has made it clear that it does not matter if a person is harmed because their attackers were upset that they had a different race, color, creed, disability, national origin, religion, sexual orientation, gender or gender identity. They will not get the justice they deserve because some in the Senate cannot face their responsibility to protect all Hoosiers. They prefer to delay and put off decisions until another day.”

In a statement Tuesday, Long explained the decision.

“Our caucus discussed the bias crimes bill for several days in an attempt to come to a consensus on language that would effectively punish those who commit crimes against their victim because of who that person is.”

Long added, “In the end, we were unable to come to a consensus on how to approach this issue. Some members felt that making a list in Indiana code would inevitably leave someone off, some felt the bill was fine as it was, and some felt that Indiana code already allows the aggravator concept to apply in a bias-crime situation, which is true.”

A quick search on the state’s General Assembly website Tuesday evening did not show any other bias crime bills in the House or Senate.