Retired priest sentenced to jail for exposing himself to teen 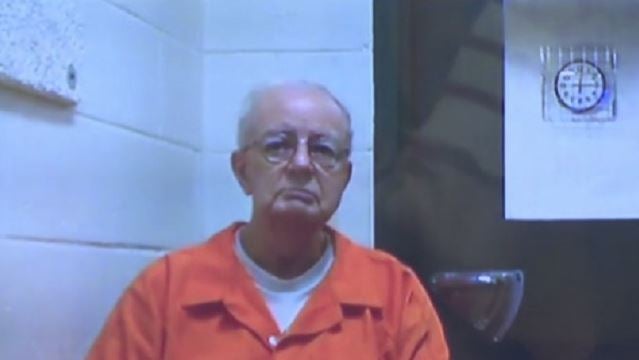 Richard Thomas, 78, appeared in a Brown County courtroom Friday morning for a sentencing hearing on two counts of Exposing Genitals/Pubic Area/Intimate Parts to a Child. He pleaded “no contest” to the charges in September. As part of a plea deal, two other charges were dismissed.

In addition to the jail time, Thomas was also ordered to serve 36 months on probation and register as a sex offender for the rest of his life. He cannot have contact with minors.

Thomas told the court he “struggled with urges” and is “remorseful.” His attorney said Thomas is undergoing treatment.

According to a criminal complaint, Thomas exposed himself to a 16-year-old boy on several dates in March 2016.

The teen told investigators while he walked to school, past Grellinger Hall in Allouez, he saw a naked man standing in one of the windows. Grellinger Hall is an independent living facility for retired priests.

The complaint said on March 16 the naked man called out “hey” to the teen after using a flashlight to get the boy’s attention.

The boy told managers of the facility.

On April 8, the administrator of the facility said he found Father Thomas in an unoccupied room – where the teen reported seeing him – dressed in a bathrobe and standing in front of a window. Thomas told him he was looking for a place to shower.

The complaint goes on to say Thomas was surprised to learn he was being charged with felony crimes, not misdemeanors, because it didn’t involve sexual contact with a person.

Thomas has two prior arrests for exposure, including an incident in 1993 in which police “found him running around naked looking for others.”

The Catholic Diocese of Green Bay released this statement following Thomas’ arrest for the most recent incident:

“Following the policies of the Diocesan Code of Pastoral Conduct, Father Thomas, a senior (retired) priest, has been restricted from performing any public ministry pending the outcome of the civil authorities’ investigation. This is an ongoing investigation and the Diocese is fully cooperating.

The Diocese asks for prayers for all involved in this matter.

The Diocese remains committed to the protection of children and vulnerable adults. Its policies include permanently removing from ministry any clergy who have a substantiated allegation of abuse of a minor against them.”