Schools gearing up for solar eclipse 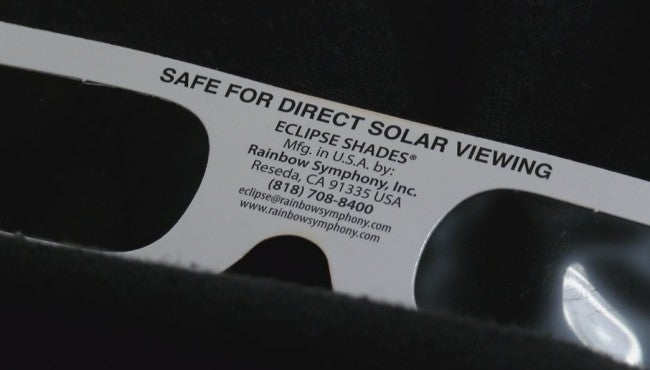 INDIANAPOLIS (WISH) – It’s nearly time for the first solar eclipse in almost 40 years. Some schools have planned special activities for the day so students can see history first hand.

Two IPS Schools, Longfellow STEM Middle School and Center for Inquiry School 2, have planned events and purchased protective glasses for their students to watch the eclipse.

Longfellow students have studied solar eclipses for the past week through various activities. Center for Inquiry School 2 students attended an interactive solar eclipse session on Friday, and Monday the entire student body will watch the solar eclipse from a spot downtown.

The School of Science at Indiana University-Purdue University Indianapolis handed out 2,000 eclipse viewing glasses ahead of the event.

There will also be an “Eclipse Science Meetup” from 2 p.m. to 3 p.m. at University Library East Lawn.

The Indiana Department of Educated released a statement to warn parents and students to be well-supervised during the event because staring directly into the sun during an eclipse can cause vision damage.

Other local schools have sent warnings home to parents that children will be kept inside during recess hours and to not look at the sun during school departure hours while on the bus ride home.

Franklin Community schools will be on a one-hour delay Monday due to the eclipse.

For those who have not purchased protective glasses, NASA has instructions for how to make a pinhole camera.

The eclipse can be viewed through a live stream here.