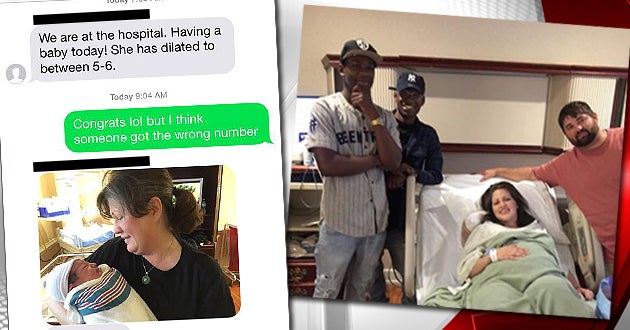 (KRON) – A young Florida man is being hailed an all-around great guy Monday after turning an awkward text message about a stranger in labor, into a story that tugs at the heartstrings.

Dennis Williams, of Tallahassee, was sent a group text message saying a Florida woman had dilated “to between 5-6.” Instead of ignoring the thread, he alerted the group to the mix up.

“Congrats lol but I think someone got the wrong number,” Williams wrote.

Moments later, he received another message containing a tender photo of the swaddled 7 lb 11 oz. baby boy resting in his grandmother’s arms.

Rather than get heated about the unwanted text messages, Williams decided to pay baby Carson Knox a visit and join the birthday party.

“Well I don’t know (you) but me and the boys will be thru to take picture with the baby,” Williams wrote.

Williams and his brother, Deorick, got into their car, bought some gifts and then went to the hospital.

As promised, they posed for photos with the baby and the family.

“I accidentally [TEXTED] a message about Mark and Lindsey having a baby to a number I had in my phone for someone else which now belongs to Mr. Dennis Williams and he and his brother came by to visit us and brought the baby a gift!” Grandmother Teresa Lashley wrote on Facebook.

“What a blessing these two guys were to our family. They were so sweet and kind to do this,” Lashley wrote.

Williams posted screen grabs of the group text and the photo with the new family at their bedside. The post has been shared over 180,000 times on Facebook.