Three injured in Sullivan Co. accident between train and semi 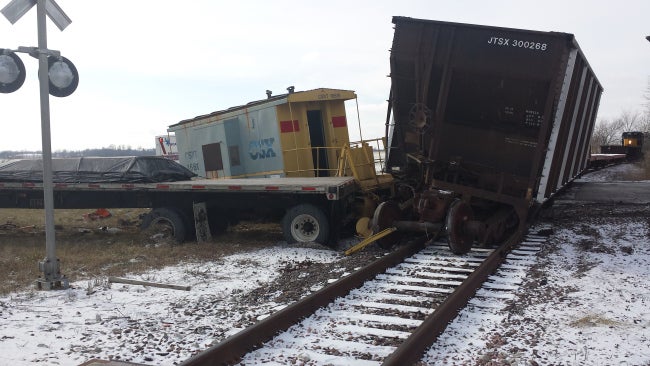 SULLIVAN COUNTY, Ind. (WTHI) – Officials responded to an accident between a semi and a train in Sullivan County that injured three.

The accident was reported just after 12 p.m. Tuesday north of Shelburn in Sullivan County on US 41.

A Sullivan County Sheriff’s Deputy at the scene stated the semi was traveling north on US 41 when it went through the intersection and struck the train. Witnesses at the scene report warning lights were on when the semi hit the train.

The deputy stated the back of the train was struck while there were two CSX employees on the back (per CSX protocol). The two CSX employees and the semi driver were taken to an area hospital for injuries. The semi also struck a vehicle in the northbound lane of US 41 after it hit the train, but no injuries were reported from that collision.

The Sullivan County Sheriff’s Office reports both northbound lanes of traffic are open but both south bound lanes will be closed for an undetermined amount of time.