Who are the LGBT advocates inside Indiana’s law change? 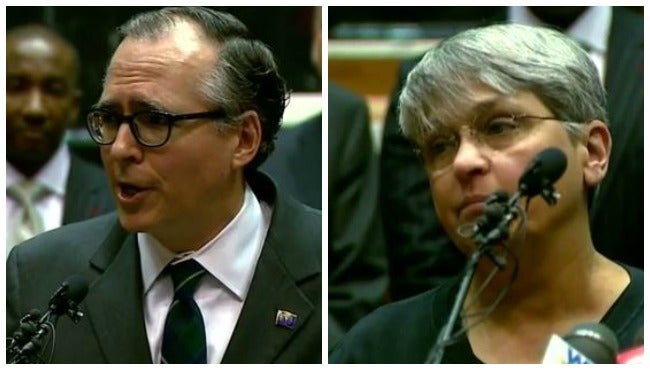 INDIANAPOLIS (MEDIA GENERAL) – Reaction began immediately pouring in after Indiana’s legislative leaders announced changes to its Religious Freedom Restoration Act to ensure protections for people regardless of their sexual orientation. At the news conference to announce the changes, Chris Douglas and Kathy Sarris, both members of Indiana Equality Political Action Committee, stood side by side with lawmakers.

Following the announcement, the Indy Rainbow Chamber of Commerce applauded the changes. It wrote, “We also applaud and honor the involvement of charter Chamber member Chris Douglas and Kathy Sarris. We are certain they represented our interests well even though current Chamber leadership was, unfortunately, not part of the conversation.”

Chris Douglas and Kathy Sarris are both board members on Indiana Equality’s PAC. If you are not familiar with Indiana’s political workings, you may not know them. So, who are these important voices at the policy table?Chris Douglas

Douglas is a long-time Republican and businessman. He’s a founding partner and managing director of C.H. Douglas and Gray Wealthy Management. He’s well-decorated for his business acumen. Indianapolis Business Journal named him to its “Forty under 40” list of influential people in business. And, Indianapolis Monthly named him to its “Best of Indy” list in the area of financial planning.

Douglas is also very involved throughout the city of Indianapolis. He’s a member of the Board of Advisors of Dance Kaleidoscope, a professional contemporary dance company in Indiana, and he serves on the Finance Committee of the Indiana Historical Society.

Douglas, who is openly gay, has been fighting for LGBT rights for years. He’s the founding member of the Indy Rainbow Chamber of Commerce. During the news conference, he recalled years ago when he publicly advocated in the press for gay rights and a non-discrimination policy in Indiana, he lost his corporate job right after those interviews. He got emotional describing this period of his life.

Both he and Sarris described Thursday’s developments as just a start.

“We are not going to let any of these people off the hot seat.”

“We are not going away,” Sarris said vehemently at the news conference with Indiana’s legislators. She was adamant that this conversation was starting and not ending. She said members of the LGBT community would not let up on lawmakers as they continued to work to protect the rights of gay, lesbians and transgender people.

Sarris has long been advocating for gay rights in Indiana. Back in 2007, she was widely quoted as speaking up against then-Indianapolis Colts coach Tony Dungy’s decision to appear before a conservative Christian group that supported legislation to make marriage in Indiana only between a man and a woman.

Her passion for her cause was evident again Thursday as she moved her way up to the platform without being called upon. “We are not going to let any of these people off the hot seat,” she told reporters. “We’ve struck a compromise. They’ll be hearing from us again.”