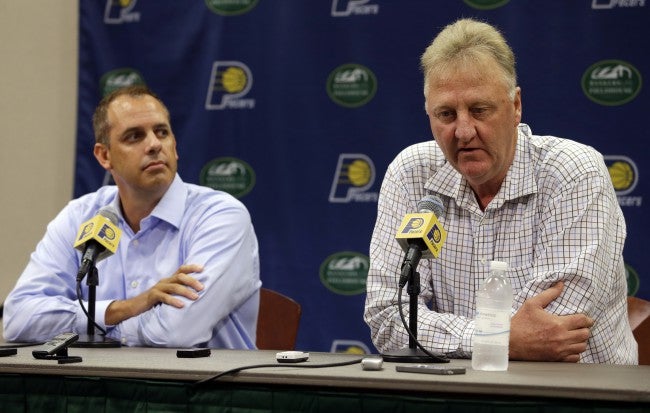 INDIANAPOLIS (WISH/AP) – Indiana Pacers President Larry Bird and head coach Frank Vogel spoke with the media Friday morning about the team’s 2014-2015 season and what the future holds for the Blue and Gold.

The Pacers’ season came to an end this week following a 95-83 loss against the Memphis Grizzlies.

“It’s disappointing not making it to the playoffs first and foremost,” Vogel said following the team’s loss Wednesday night. “But I am proud of this group’s resiliency and their ability to overcome a ton of adversity dating all the way to the summer.”

When asked Friday about Pacer David West, and what his upcoming plans are, Bird revealed few details, but eluded to the player’s return.

“I have no clue,” he said. “David was talking about next year, so I’m sure he’s going to come back.” Vogel later added, “My gut is telling me that he will opt in.”

Bird also touched on his hopes for the 2015 NBA Draft.

“We need a little bit of everything,” he said. “I think I’ll probably take the best player available.”

Head coach Frank Vogel spoke of other members of the team, including Roy Hibbert, and his role in the upcoming season.

The coach also answered the question on everyone’s minds about next year for Paul George, who was absent much of the 2014-2015 season after suffering a serious leg injury in August.

“I have the ultimate confidence that he’s going to work his tail off this summer and come back better than ever,” Vogel said of George.

George was back on the court practicing with the team earlier this spring, and said he “saw the old PG coming back.”