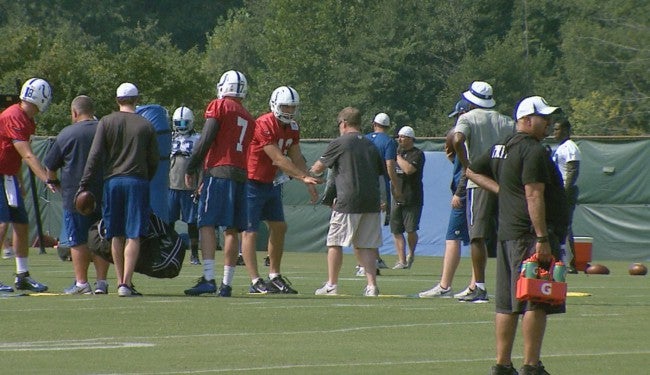 INDIANAPOLIS (WISH) — The preseason hasn’t even wrapped, but the preparation for Week 1 at Buffalo has already begun.

“I think we’ve been working on that almost since the start of training camp, getting this team ready for not only the opener, but the whole season,” said Colts head coach Chuck Pagano.

During this week’s meetings and practice, the team has already started game planning for the Bills.

“You start preparing, you start looking at film, figuring out what your plan is going to be,” said Colts quarterback Andrew Luck. “Going to be tough, that’s a good defense, Coach Ryan always brings some funky stuff.”

With the regular season looming, the Colts offense is still very much a work in progress. In the team’s game against the Rams, the unit showed glimmers of promise; they were effective passing the ball at times, but struggled running the ball with starter Frank Gore on the sidelines.

Luck said on Tuesday that he’s more encouraged than concerned.

“Obviously it wasn’t perfect by any means, but I think there’s room to grow in a lot of areas,” said Luck. “I think we’re on the right track.”

A big focal point of this offense has been the line. For Jack Mewhort, who has been dealing with a position change, the preseason reps have been invaluable.

“All I wanted to do was improve and improve my technique and have positive plays, and I think I accomplished that,” said Mewhort. “I just want to be a consistent football player, still coming out here with that attitude and just be a guy that we can depend on and give other people an opportunity to make plays.”

On the injury front, starting defensive tackle Art Jones’ status is still unknown. Coach Pagano said Tuesday he had no new information on Jones’ ankle injury. Jones declined to speak to reporters, but walked with a noticeable limp in the locker room.

Pagano added he wasn’t sure if running back Vick Ballard will play on Thursday. Ballard is battling a hamstring injury.