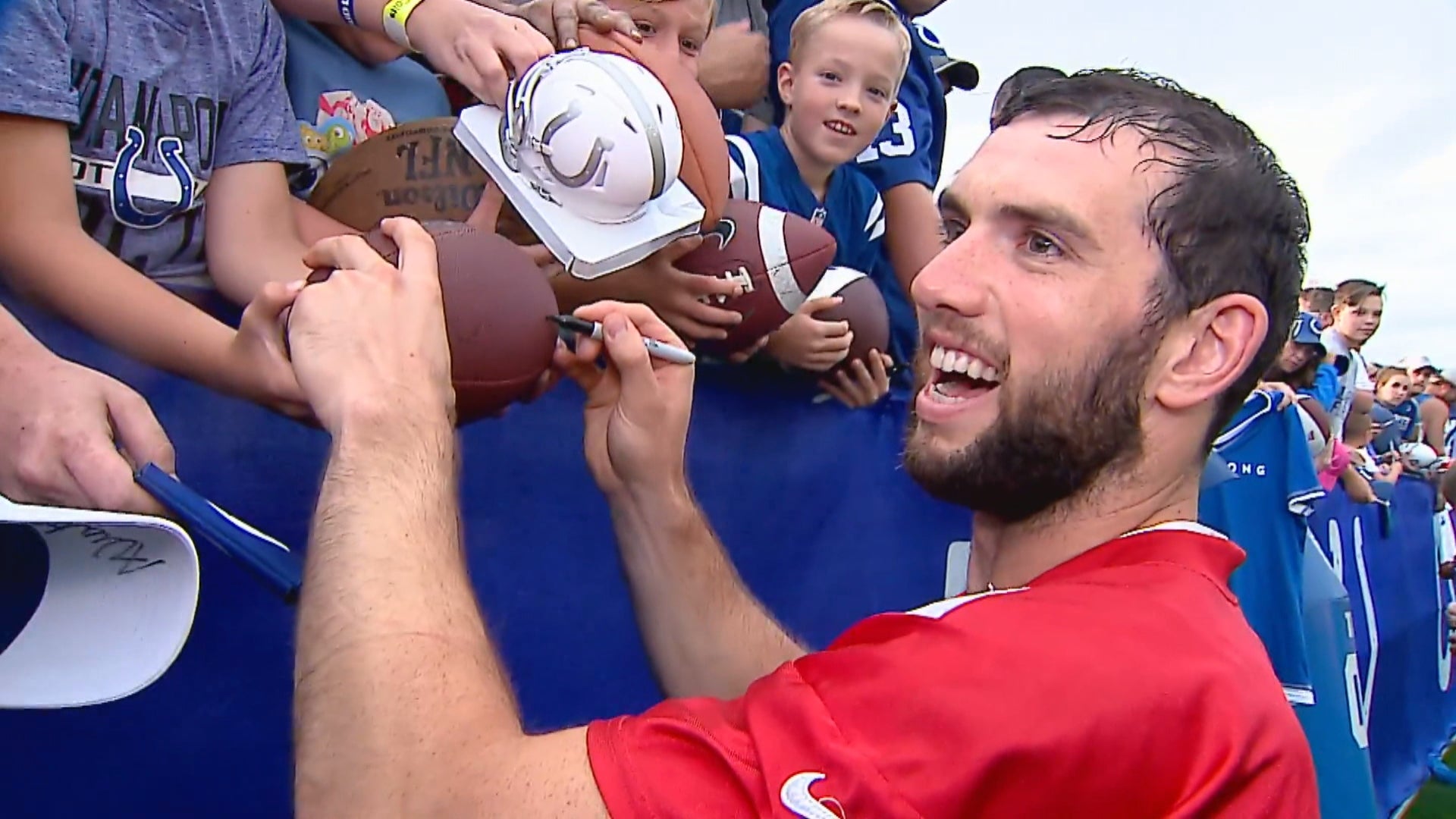 Luck passed his first major tests by returning to the practice field, taking all of his normal snaps during the Colts’ first two workouts, connecting with receivers on the run rather than throwing at stationary targets while feeling good physically and mentally.

It’s a good start for the quarterback with the surgically repaired right shoulder.

“Every day there will be new hurdles,” he said Sunday. “The second day, things seemed to calm down or slow down a lot. The first day I was nervous, I was excited and there was a certain element of the unknown. I wasn’t quite sure what was going to happen. It was also very fun to be out there with the guys and focus on getting better at practice and not just surviving practice.”

The angst could be sensed all around the Colts’ new camp site earlier this week in Westfield, Indiana, a northern suburb of Indianapolis.

Fans roared throughout Thursday’s opening workout, even cheering when Luck was throwing to ball boys and quarterbacks. One fan shouted “stay in that pocket” as Luck went through an individual drill designed to help all four quarterbacks evade oncoming pass rushers.

He was just 4 of 9 with an interception in his first 11-on-11 work since having a partially torn labrum fixed in January 2017.

He resumed throwing Sunday night, his first full practice in pads in nearly 20 months, and was 19 of 22 with two touchdowns in seven-on-seven and 11-on-11 drills.

“There have been four or five throws that have been like, ‘Oh yeah, that looks 100 percent like normal,'” coach Frank Reich said before the evening workout. “Then there have been one or two that we just need to work through and continue to get better.”

Luck did not talk with reporters after those practices or Saturday when he left the field about halfway through Saturday’s practice at Grand Park Sports Campus — as scheduled.

“It’s weird, but this is the plan Frank and I and (general manager) Chris (Ballard) and everybody who helped came up with at the start. I know it’s helped me continue to get better and better and better,” Luck said. “It is sort of a bit odd to reconcile ‘OK, I’m out here, but I don’t get to participate.”

But after blaming his slow recovery at least partially on skipping steps in a rush to get back, he’s sticking to the plan this time.

And Reich intends to hold him to that promise even though Luck is under no restrictions on the field.

Luck still must pass a few more milestones such as throwing deep balls and taking hits. The wait may not be too long.

Reich has said he expects Luck to play in the Colts’ preseason opener on Aug. 9 at Seattle, though Reich has not yet determined how much Luck will play.

“I’m going into this from the very start that he was full go, fully cleared for everything. We have some planned rest days, but in my mind the amount that he plays is he’s 100 percent in my mind,” Reich said. “We will plan him playing accordingly based on how much we would want to play our starting quarterback.”

Luck isn’t just starting to shake off the rust.

With each successive practice, he seems to be picking up Reich’s newly installed offense better and continues to look stronger and more confident in the shoulder.

“It’s fun. What can I say? I had jitters like before a game for that first practice, which was a neat feeling. I hadn’t felt that way in a long time. It’s been responding well,” he said. “No pain. Soreness, tiredness for sure and stresses on my arm that are different. Shoot, there are stresses on everybody’s body at this camp that are different.”

Notes: Reich hopes to have injured offensive tackles Anthony Castonzo and Austin Howard back “pretty soon.” Neither has practiced yet and only eight of the 15 offensive linemen practiced Saturday. … Offensive lineman Jack Mewhort returned to practice Sunday after getting an extra day off Saturday. … The evening practice was marred by a scuffle that began when right guard Matt Slauson instigated after he thought George Odum took an unnecessary hard shot on rookie running back Nyheim Hines. … Linebacker Anthony Walker left practice early with a groin injury.