Here’s what we know about new coronavirus variants popping up 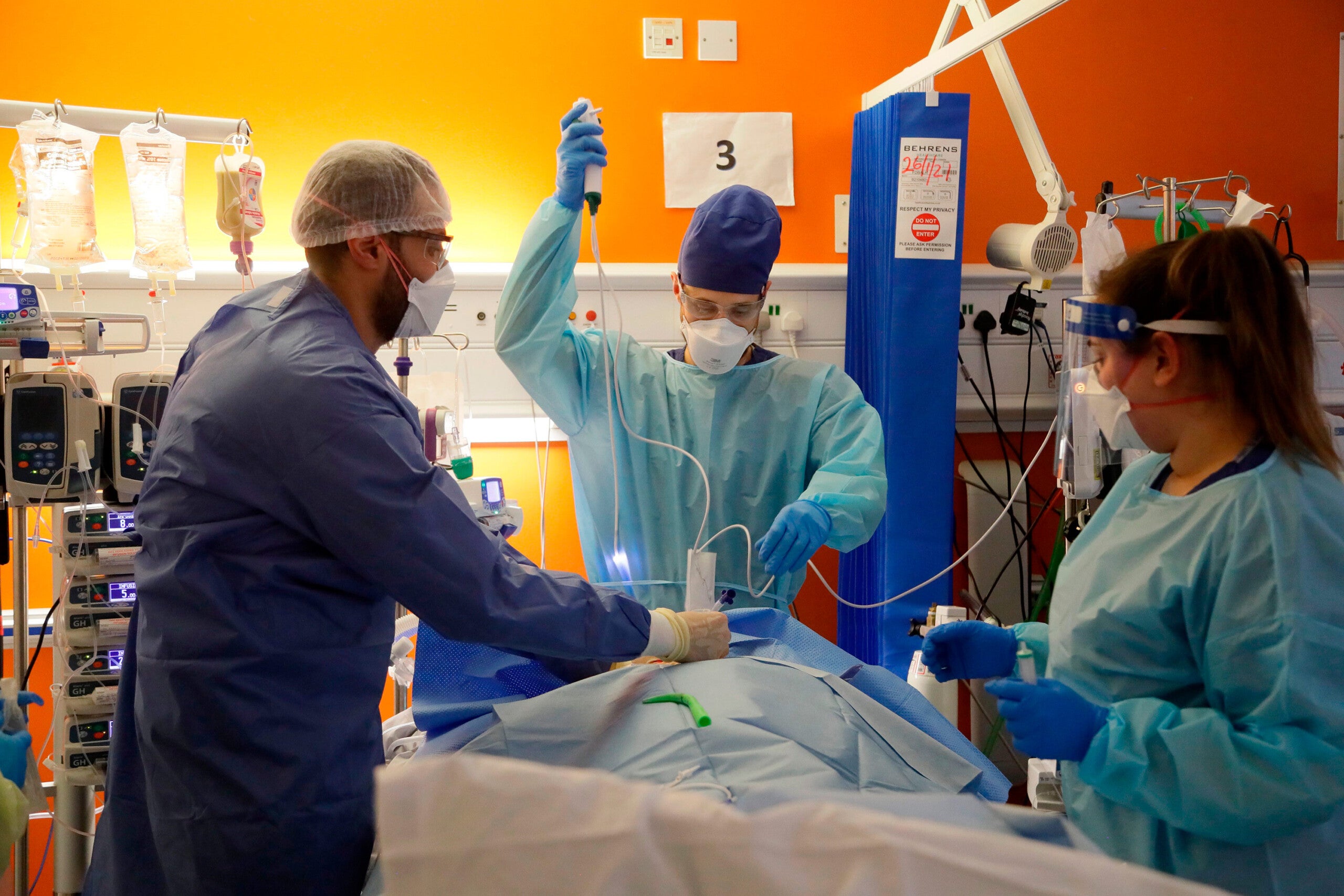 Critical Care staff carry out a tracheostomy procedure on a Covid-19 patient on the Christine Brown ward at King's College Hospital in London on January 27, 2021. - The scale of Britains coronavirus outbreak can seem overwhelming, with tens of thousands of new infections and more than 1,000 deaths added each day. (Photo by Kirsty Wigglesworth / POOL / AFP) (Photo by KIRSTY WIGGLESWORTH/POOL/AFP via Getty Images)
by: Maggie Fox, CNN
Posted: Jan 31, 2021 / 03:09 PM EST / Updated: Jan 31, 2021 / 03:36 PM EST

(CNN) — A variant suspected of helping fuel a surge of coronavirus in Brazil’s Amazon region shows up in Minnesota. Another that’s been worrying officials in South Africa pops up in two places in South Carolina and, just days later, in Maryland.

Scientists are not surprised to see the coronavirus changing and evolving — it’s what viruses do, after all. And with so much unchecked spread across the US and other parts of the world, the virus is getting plenty of opportunity to do just that.

Four of the new variants are especially worrisome.

“The variants that have been identified recently seem to spread more easily. They’re more transmissible, which can lead to increased number of cases, and increased stress on our already overtaxed system,” Dr. Rochelle Walensky, the newly appointed director of the Centers for Disease Control and Prevention, said in a briefing Wednesday.

What scientists most fear is that one will mutate to the point that it causes more severe disease, bypasses the ability of tests to detect it or evades the protection provided by vaccination. While some of the new variants appear to have changes that look like they could affect immune response, it’s only by a matter of degree.

Governments are already reacting. Colombia banned flights from Brazil, and Brazil banned flights from South Africa. It’s almost certainly too late to stop the spread, and there’s some indication the mutations in these variants are arising independently and in multiple places.

At the top of the list for researchers in the US is the B.1.1.7 variant first seen in Britain. The CDC has warned it could worsen the spread of the pandemic. It reports more than 300 cases in 28 states — but those are only the cases caught by genomic sequencing, which is hit and miss in the US.

Although hearing about mutant new viruses can frighten people, scientists say they are reassured by what they have found: The human immune system can handle the variants that have sprung up so far, especially B.1.1.7.

“As far as we know it is transmitted in exactly the same way,” Gregory Armstrong, who directs the Office of Advanced Molecular Detection at CDC, told CNN.

However, the mutations in the variant help it enter cells more easily — which means if someone, says, breathes in a lungful of air that has virus particles in it, those particles are going to be more likely to infect some cells in the sinuses or lungs rather than bouncing off harmlessly. The worrisome changes enhance the spike protein that the virus uses to attach to cells, meaning people are more likely to become infected by an exposure.

So people need to try harder to prevent spread until vaccination can be sped up.

There have been some confusing reports about whether B.1.1.7 has caused more severe disease in Britain.

“The most recent data indicate from the UK that it appears to be a bit more virulent in the sense of potentially causing more serious disease,”National Institute of Allergy and Infectious Diseases Director Dr. Anthony Fauci told a webcast Thursday sponsored by the National Education Association.

The variant first seen in South Africa called B.1.351 or 501Y.V2 was reported for the first time in the US Thursday, in South Carolina. On Saturday, Maryland’s governor announced a sample from someone in the Baltimore area had also shown the characteristic mutation pattern of B.1.351.

None of the three people had any contact with one another and none had traveled recently. This suggests the variant has been spreading undetected in the communities.

It’s been seen in more than 30 other countries, according to the World Health Organization.

“The variant which was first detected in South Africa has spread quickly beyond Africa and so what’s keeping me awake at night right now is that it’s very likely circulating in a number of African countries,” Dr. Matshidiso Moeti, WHO regional director for Africa, said Thursday.

It could help the virus partly escape the effects of vaccines. “There is more concern about immune escape,” Armstrong said. Vaccine makers and academic researchers are testing samples of this variant, along with others, to see if it can evade the immune response caused by vaccination.

Fauci says even so, there’s an extra cushion of immunity caused by vaccination. It gives some wiggle room. “The good news is the vaccines as they exist now still would be effective against the mutants. The sobering news … as you get more and more replication, you can get more and more of evolution of mutants, which means you always got to be a step ahead of it,” Fauci told CNN on Monday.

But Maryland-based vaccine maker Novavax released preliminary results of its coronavirus vaccine Thursday that showed while the vaccine was more than 89% effective in a Phase 3 trial in Britain, a smaller, earlier Phase 2 trial conducted in South Africa while the variant was circulating showed efficacy there was only 60%.

Just in case, Pfizer and Moderna say they are working to make booster vaccines that would address mutant versions. The design of the vaccines is meant to make that a quick and easy process — just plugging in a new version of the genetic code used to generate the vaccines will do it.

There’s also evidence the changes may help some escape from monoclonal antibody treatments made by Eli Lilly and Co. and Regeneron.

A variant suspected of fueling a resurgence of viral spread in Brazil turned up in Minnesota for the first time in January. It was in a traveler from Brazil, so there’s no indication yet of community spread.

This variant, called P.1, was found in 42% of specimens in one survey done in the Brazilian city of Manaus, and Japanese officials found the variant in four travelers from Brazil.

“The emergence of this variant raises concerns of a potential increase in transmissibility or propensity for SARS-CoV-2 re-infection of individuals,” the CDC said. P.1 also carries the E484K mutation.

Finally, there’s a variant seen in California, as well as a dozen other states. “We don’t know yet what the significance of that one is,” said Armstrong. It also has a mutation in the receptor binding domain of the spike protein. It is called L452R and while it’s being found commonly, it’s not yet clear if it’s more transmissible.

Any viral strain can become more common because of what’s known as the founder effect. “The founder effect is a matter of a virus being in the right place at the right time,” Armstrong said. If a particular strain happens to be circulating when transmission increases because of human behavior, that strain will ride along and become more common not because it spreads more easily, but simply because it was there.

It will take more study to show whether these variants can increase the already astronomical spread of the virus. The US has more than 25 million diagnosed cases and more than 430,000 deaths. But the University of Washington’s Institute for Health Metrics and Evaluation has now started including the variants in its projections.

“Rapid variant spread can extend the period of daily deaths over 1,000 well past May 1,” it says in its January 28 forecast. The IHME projects 595,000 people will have died in the US by May 1.

“The emergence of variants underscores the need for public health action,” Walensky advised.

“First, get vaccinated when it’s your turn. Also, some people may need help getting vaccinated — please consider helping your neighbors and loved ones schedule or travel to their appointments. Second, wear a mask. Practice social distancing and wash your hands. And finally, now is not the time to travel.”