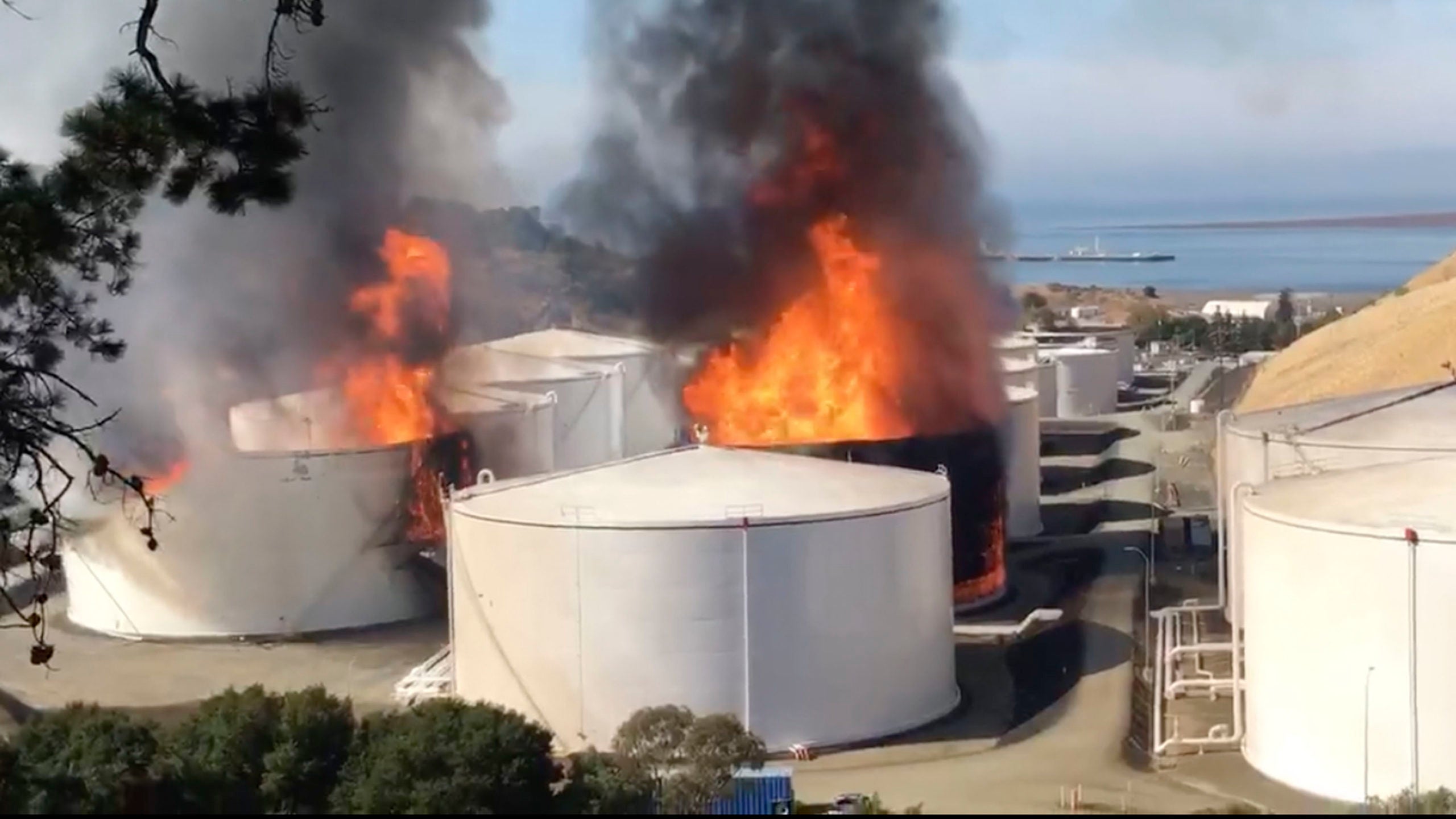 A fire burning at NuStar Energy LP facility in Crockett, Calif, in the San Francisco Bay Area prompted a hazardous materials emergency that led authorities to order the residents of two communities, Crockett and Rodeo, Calif., to shelter in place and stay inside with all windows and doors closed on Oct. 15, 2019. (Henry Wofford/Napa County Sheriff's Office via AP)
by:
Posted: Oct 15, 2019 / 09:54 PM EST / Updated: Oct 15, 2019 / 10:49 PM EST

A firefighting expert says crews will have to use water and foam to battle a huge blaze at a fuel storage facility in the San Francisco Bay Area.

About 12,000 residents are warned Tuesday to stay inside with windows and doors closed as black smoke fills the sky above the ethanol fire at the Selby Terminal in Crockett.

Marcelo D’Amico of Texas-based Orcus Fire and Risk says crews are using water to cool tanks adjacent to the ones already burning. He says foam to help douse the flames is being sprayed from fire trucks and delivered via a fixed system installed at the facility.

He says ethanol blazes are not necessarily any more difficult to fight than gasoline or diesel fires.

Gabriel Iturbe says he could see “thick, black smoke” as he tried to get home in heavy traffic after a fuel storage site in the San Francisco Bay Area caught fire Tuesday.

The Rodeo resident was desperate to get to his sick 17-year-old son at home and get the family away from the smoky air.

Officials warned residents to stay indoors and seal windows after a facility owned by San Antonio-based NuStar Energy LP caught fire around 2 p.m. The fire was burning in Crockett, about 30 miles (50 kilometers) northeast of San Francisco.

Iturbe said his son, Marc, heard a loud explosion that “rocked the house” and then he heard what sounded like a jet plane, and then another explosion.

A fuels storage company whose facility in the San Francisco Bay Area caught fire Tuesday says they’re cooling nearby tanks to minimize the spread of fire but provided few other details.

Officials from oil storage and pipeline operator NuStar Energy LP, based in in San Antonio, said two tanks at the Selby Terminal in Crockett that caught fire contained ethanol.

There are numerous reports of explosions and people in the area were asked to stay inside.

A fire burning at an oil storage facility in the San Francisco Bay Area prompted a hazardous materials emergency that led authorities to order the residents of two communities to shelter in place and stay inside with all windows and doors closed.

Contra Costa Fire Department spokesman Steve Hill said that an hour into battling the blaze, firefighters seemed to be making progress and were continuing to keep adjacent tanks cooled with water.

The fire started at a NuStar Energy LP facility in Crockett, California, about 30 miles (50 kilometers) northeast of San Francisco.

Officials closed both directions of the Interstate 80.

Hill said a shelter in place directive was ordered for the city of Crockett and the adjacent rural community of Rodeo.