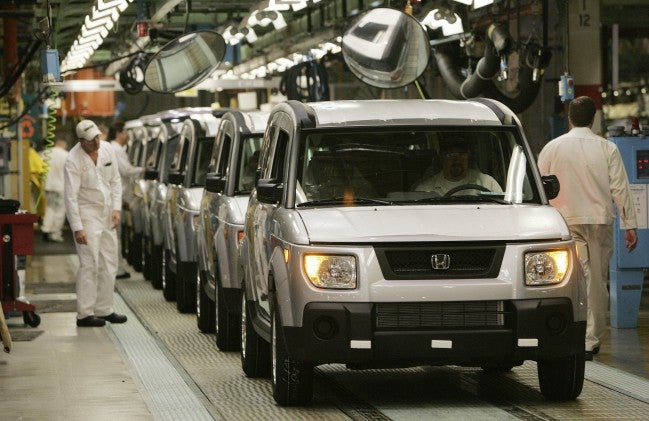 Honda spokeswoman Anita Sipes said the automaker has tried to use alternative means of getting parts. But she said the dockworkers’ contract dispute is preventing Honda’s Greensburg plant from getting critical items, including electronics and transmissions, because of cargo bottlenecks at 29 West Coast ports.

To deal with production cuts brought on by that parts shortage, Honda identified Monday and Friday of this week and Feb. 23 as days employees can stay home without pay, take paid time off or come in to work for training or other duties.

Production at the Honda plant will be cut in half for the rest of the week, but Sipes said Honda will re-evaluate the decision as the week progresses.

“We are monitoring the situation closely,” she told the Greensburg Daily News.

The 1.3 million-square-foot plant, about 50 miles southeast of Indianapolis, employs about 2,000 workers, who assemble two Honda Civic models and one Acura ILX model.

The parts shortage is also affecting some of Honda’s Indiana suppliers, including Greensburg-based Hitachi Powdered Metals.

Vice President Gregory Owens said that as production slows at Honda, the automaker needs fewer parts from suppliers such as Hitachi, which produces valve guides, timing pulleys and sprockets, primarily for the auto industry.

Owens said the impact has been minimal so far, but if the slowdown continues for a long period, Hitachi might have to reduce overtime for some of its 240 full-time employees.

Contract negotiations between the dockworkers and their employers began in May. The last contract expired in July. The two sides have reached tentative agreements on many of the key issues, but are stuck on whether to change the process of arbitrating workplace disputes.

U.S. Secretary of Labor Thomas Perez visited San Francisco this week and urged the International Longshore and Warehouse Union and the Pacific Maritime Association to reach a settlement soon.