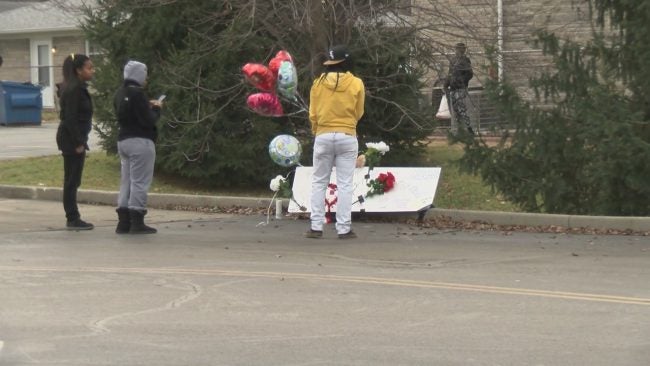 INDIANAPOLIS (WISH)-Family members of a 14-year-old shot and killed Monday night are urging the shooter to surrender.

Police found Anthony Lee Hughes shot in the chest outside a Popeye’s restaurant on 16th Street on the city’s northwest side.

His family gathered outside the Popeye’s Tuesday and placed balloons, flowers and messages of love where police found Hughes.

Jaquece Hughes said she has no idea why someone would shoot her nephew.

Hughes was in his first year at Northwest High School. IMPD Capt. Michael Elder said Monday Hughes was “really not doing anything wrong. Leaving a restaurant.”

He died at the hospital after police found him bleeding in the parking lot. One witness told police a car pulled into the lot and someone fired from the car. IMPD has not released a description of the car.

“We have to take this and use this as a tool to help people and to let them know, we have to reclaim these streets and reclaim these kids from senseless violence,” Jaquece said.

Pastors, patrolmen, the Chief of Police and the deputy mayor lined up side-by-side two blocks from the Popeye’s Tuesday. They described the news conference as a call for action.

“We desire not only solidarity but solutions,” deputy mayor David Hampton said.

His aunt Jaquece hopes they’re right, but she knows that won’t bring back his sense of humor or the smile that she can’t get out of her head.

“I could remember carrying him in a car seat to every basketball game and every practice,” she said. “That was my baby. That was my first nephew.”