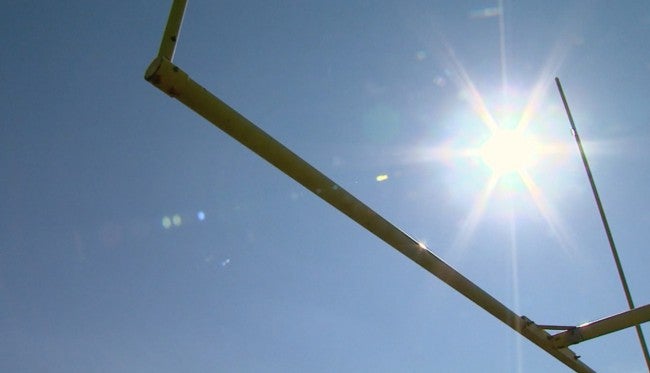 NOBLESVILLE, Ind. (WISH) — If you ever visit football practice at Guerin High School, you might hear things you’ve never heard before, at least, not on the field.

That’s because Guerin has someone who’s not traditionally part of practice at most schools.

Haan is the school’s new chaplain. The Diocese of Lafayette transferred him from service as a parish priest at St. Elizabeth Seton Catholic Church in Carmel. He is the spiritual guide for the students and the staff. But he has also been invited to join the football team whenever his schedule allows.

Father Haan is uniquely qualified to be on the field with them. He can play the game.

“I do think the guys are a bit surprised when they see a priest zip a spiral across the field,” Haan said.

Haan is in the IHSAA record books. He’s there for passing success during one of his seasons at Lafayette Central Catholic.

He went on to Purdue University as an invited walk-on for the Boilermakers. While there, he realized the game “was consuming my life.” Things began to change when he coached some junior high players.

“I start realizing I’m more passionate about helping these kids be virtuous, good men and, ultimately, cared about them getting to Heaven,” he said.

Haan transferred to the University of Notre Dame to consider another option.

“By the time I graduated, there really wasn’t a doubt in my mind. That’s the way God made me. To be a priest,” Haan said.

Haan’s gifts as a player – and as a priest – allow him to discuss anything from the “Cover 2” to Thomas Aquinas. Players and members of the staff can ask him questions on the sidelines that they might not ask anywhere else. “I certainly don’t want to distract the guys from that task at hand during practice,” Haan said. But, “if they’ve got a struggle in life, they’ve got confusion in regards to their faith, I’ll take that opportunity.”

Haan hopes the players learn that faith is not just for their moments in the school chapel or for Sunday mornings.

“Faith permeates all and unifies all of our life,” he said.

He is grateful to Head Coach Tom Dilley and the rest of the Guerin coaching staff for being open to his role with the team. Father Haan acknowledges that what he hopes to accomplish wouldn’t be possible without their support. He’ll be with the team – at practice and at games – as often as his schedule allows. But, he may measure success differently than the coaches.

“If those kids aren’t better human beings by the end of the season, then I say it was a losing season,” said Haan.