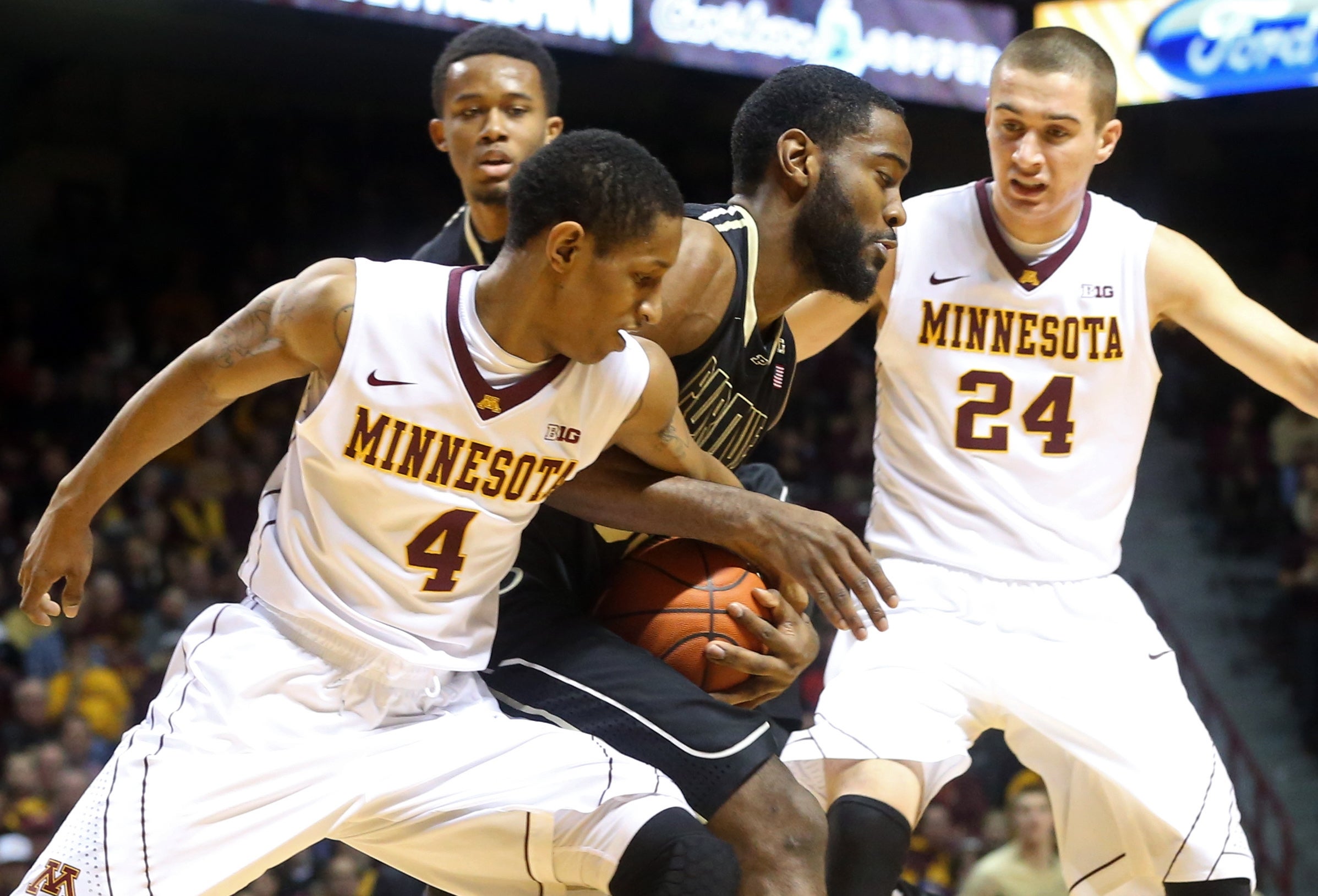 MINNEAPOLIS (AP) – Time and again in the second half, the Purdue Boilermakers inbounded the ball and headed toward the frontcourt to try to start their offense.

Time and again, DeAndre Mathieu, Andre Hollins and Carlos Morris refused to even let them sniff the halfcourt line. It was the kind of defense Richard Pitino envisioned when he came to Minnesota a year and a half ago, and the Golden Gophers delivered all that and more on Saturday.

Hollins scored 18 points and Minnesota held Purdue scoreless for the first five minutes of the second half in a 62-58 victory.

Joey King added 11 for the Golden Gophers (15-9, 4-7 Big Ten), who broke the game open with a 21-2 run coming out of the break. The Gophers forced eight of Purdue’s season-high 23 turnovers during the surge, and then held on for dear life.

“I thought the beginning of the second half was as good a pressure as we’ve had since I’ve been here,” Pitino said. “That set the tone more than anything. To do that, with that intensity in a conference game against a really good team was really, really impressive. That changed the game.”

Jon Octeus had 17 points and seven rebounds and A.J. Hammons had 11 points, 10 boards and five blocks for the Boilermakers (15-9, 7-4), who saw their four-game winning streak snapped. Purdue missed 12 of its first 13 shots of the second half and trailed 48-33. But they hit seven 3-pointers in the final 9:35 to cut the deficit to two points before falling just short.

“We really turned up the intensity and when we really do that, we’re a really good team,” Mathieu said. “It’s something different that you don’t see in the Big Ten. Definitely the best defensive game we’ve played.”

Hollins and Morris keyed the offensive outburst for the Gophers after they shot just 32 percent in the first half. The pair each scored seven points during the game-deciding run and provided the defensive pressure in the backcourt that flustered the Boilermakers. Morris had five of Minnesota’s 17 steals.

The Gophers opened up Big Ten play with a loss at Purdue in which they blew a 13-point lead in the second half, and they almost blew another one.

P.J. Thompson hit a 3-pointer, Octeus banked in another one and Hammons threw down a dunk and scored on a putback to trim a 15-point deficit to seven with 6:47 to play.

But the Gophers got one more big stop in the closing seconds when Mo Walker blocked Vince Edwards’ drive to the hoop – Purdue coach Matt Painter thought he was fouled – and Hollins made two free throws to seal a much-needed win.

“We were compounding our mistakes,” Painter said. “One mistake leads to another and then you’re shuffling guys in and out trying to find the right guy who will have the confidence to bring the ball up and settle you down. We struggled doing that.”

Purdue: The Boilermakers dominated the boards, 40-28 and did not surrender an offensive rebound in the first half. … Former Boilermakers star Robbie Hummel, who now plays in the NBA with the Minnesota Timberwolves, sat behind the Purdue bench.

Minnesota: Walker had 11 points, five rebounds and three steals. … The Gophers shot 46 percent in the second half and committed just eight turnovers.

Edwards, a freshman, finished with 12 points and six rebounds. He did all of his scoring in the first half, but performed a different role in doing so. Normally a starter, Edwards came off the bench for disciplinary reasons.

Painter said that Edwards was late to a team function on Saturday morning, so the coach sent a message by removing him from the starting lineup.