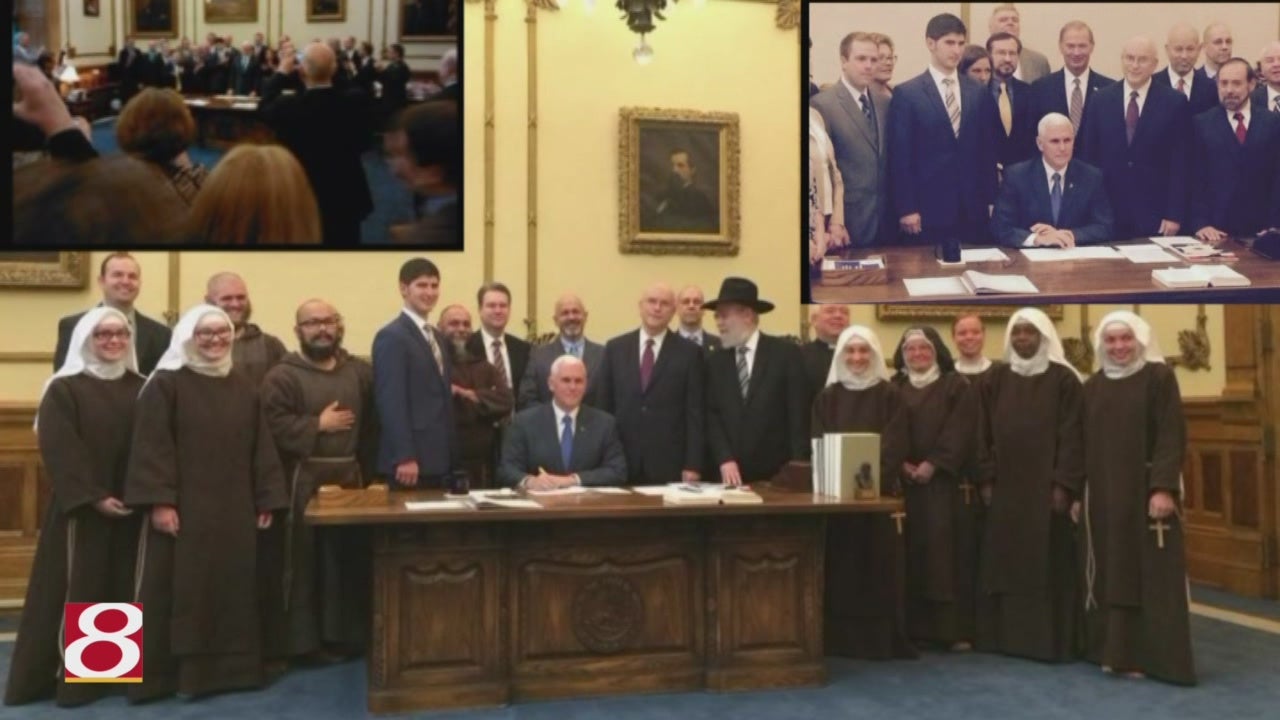 He also blamed the media for the way the bill has been portrayed.

Yet the governor signed the bill into law in a private ceremony. The media was not permitted to attend and that has contributed to the controversy created by this bill.

Photos posted on Twitter by people who were invited to the bill signing show a crowded room filled with lawmakers, conservative activists, and religious leaders.

The governor told reporters that attendance was limited for administrative reasons.

“It’s just a scheduling matter,” he said. “It was pretty crowded.”

“The governor had one last chance today to restore sanity, to veto this measure,” said House Minority Leader Scott Pelath, “but instead he chose to go behind closed doors and put his signature on one of the most mean-spirited and controversial pieces of legislation that we’ve seen in recent times.”

It’s a characterization that the governor disagrees with and in a news conference he blamed the media for wrongly portraying bill.

He said that calling the bill a consolation prize for the people who lost the gay marriage fight is inaccurate but in a photo from the bill signing he posed with the three most vocal opponents of gay marriage, Micah Clark, Eric Miller and Curt Smith.

As for corporate leaders and convention organizers who are rethinking plans to do business in Indiana now, the governor said he is concerned.

Pence points out that 19 other states have a similar religious freedom laws, including Illinois.

Below is Pence’s full statement, released after the bill was signed Thursday morning:

“Today I signed the Religious Freedom Restoration Act, because I support the freedom of religion for every Hoosier of every faith.

“The Constitution of the United States and the Indiana Constitution both provide strong recognition of the freedom of religion but today, many people of faith feel their religious liberty is under attack by government action.

“One need look no further than the recent litigation concerning the Affordable Care Act. A private business and our own University of Notre Dame had to file lawsuits challenging provisions that required them to offer insurance coverage in violation of their religious views.

“Fortunately, in the 1990s Congress passed, and President Clinton signed, the Religious Freedom Restoration Act-limiting government action that would infringe upon religion to only those that did not substantially burden free exercise of religion absent a compelling state interest and in the least restrictive means.

“Last year the Supreme Court of the United States upheld religious liberty in the Hobby Lobby case based on the federal Religious Freedom Restoration Act, but that act does not apply to individual states or local government action. At present, nineteen states-including our neighbors in Illinois and Kentucky-have adopted Religious Freedom Restoration statutes. And in eleven additional states, the courts have interpreted their constitutions to provide a heightened standard for reviewing government action.

“In order to ensure that religious liberty is fully protected under Indiana law, this year our General Assembly joined those 30 states and the federal government to enshrine these principles in Indiana law, and I fully support that action.

“This bill is not about discrimination, and if I thought it legalized discrimination in any way in Indiana, I would have vetoed it. In fact, it does not even apply to disputes between private parties unless government action is involved. For more than twenty years, the federal Religious Freedom Restoration Act has never undermined our nation’s anti-discrimination laws, and it will not in Indiana.

“Indiana is rightly celebrated for the hospitality, generosity, tolerance, and values of our people, and that will never change. Faith and religion are important values to millions of Hoosiers and with the passage of this legislation, we ensure that Indiana will continue to be a place where we respect freedom of religion and make certain that government action will always be subject to the highest level of scrutiny that respects the religious beliefs of every Hoosier of every faith.”

A statement from the American Civil Liberties Union of Indiana was released shortly afterward by Executive Director Jane Henegar:

“The timing of this legislation is all important to understanding its intent: the bill was introduced as a backlash reaction to achieving marriage equality for same-sex couples in Indiana,” said Jane Henegar, ACLU of Indiana executive director. “We are deeply disappointed that the governor and state lawmakers have been tone-deaf to the cries of legions of Hoosiers–including businesses, convention leaders, faith communities and more than 10,000 people who signed petitions against the bill–who say they don’t want this harmful legislation to impair the reputation of our state and harm our ability to attract the best and brightest to Indiana.”

“While on its face the law is constitutional, only time will tell the full consequences of the state RFRA. It poses harm to our reputation as a welcoming state that is open to everyone and it disrupts the balance that respects individuals’ freedom of religion without jeopardizing others’ freedom from discrimination. The ACLU will remain vigilant to the effects of SB 101 and we will continue to push lawmakers and the courts until all members of the LGBT community receive the Constitution’s full protection from discrimination and unequal treatment. We have been fighting for the LGBT community for over seven decades. We will keep on fighting to end discrimination wherever we see it, for as long as it takes.