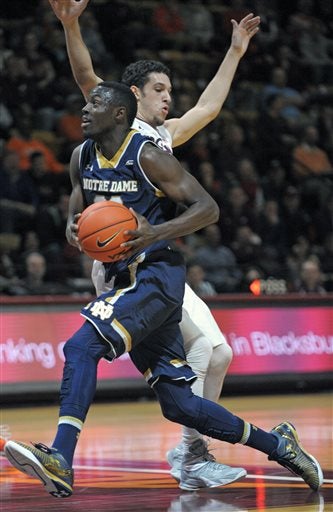 Grant shot 6 of 9 from the floor, including two 3-pointers, as the Fighting Irish (18-2, 6-1 ACC) won their third straight game. Pat Connaughton added 17 points and tied a season high with five 3-pointers on a night when the Fighting Irish shot 12 of 26 from beyond the 3-point arc.

Zach Auguste finished with 16 points and Demetrius Jackson had 12 for Notre Dame, which shot 49.2 percent from the floor (29 of 59).

The Irish, who beat Virginia Tech for the fifth straight time, led 38-28 at halftime and broke open the game with a 17-6 run to start the second half. Jackson hit two 3-pointers in that run, and a layup by Auguste gave Notre Dame a 55-34 lead – its biggest lead of the game – with 14:52 remaining.

Virginia Tech: The Hokies announced before the game that center Joey van Zegeren has left the men’s basketball team after he was suspended indefinitely by Williams for an undisclosed violation of team rules. … Virginia Tech played without freshman Justin Bibbs, the team’s leading scorer at 13.6 points per game. Bibbs suffered a concussion in practice Jan. 16.

Notre Dame: At 6-1 in conference play, Notre Dame is off to its best league start since opening Big East play 6-1 during the 2002-03 season. … For the first time in school history, Notre Dame has won its first three conference road games. … Connaughton’s 10 rebounds marked the fifth time this season that he has recorded a double-double. … Connaughton made his 102nd consecutive start Thursday night. He has played in all 121 games in his career, starting 105 of those.