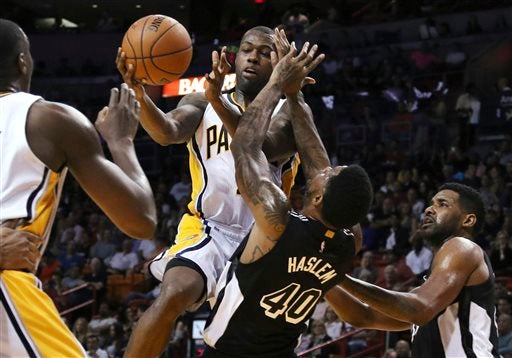 Dwyane Wade scored 13 for Miami, which led by 20 late in the third quarter before Indiana ripped off an 11-0 run and got right back into the game.

Indiana closed within one on Ian Mahinmi’s basket with 1:38 left, but David West lost the ball under the hoop on the next Pacers possession. The Pacers would eventually get within one again on George Hill’s layup.

Wade made one free throw with 6.9 seconds left, and Indiana’s hope at overtime went awry when C.J. Watson’s open 20-footer from the right corner rimmed out at the buzzer.

Luis Scola scored 14 points, Hill and Watson each scored 13 and West had 12 for the Pacers, who dropped their seventh straight.

Indiana was within 77-72 not long before Deng – who has been battling illness for several days – made a pair of 3-pointers midway through the fourth, the second of them pushing Miami’s lead to 10.

West scored with 2:55 left to get Indiana within four, Hill connected on a jumper while Wade was fouling Mahinmi, and that free throw – which Mahinmi banked in – cut Miami’s edge to 86-83.

But Miami, which led by 10 in the first quarter, 17 at halftime and as many as 21 at one point, never ceded the lead in the final three quarters. Indiana led for only 27 seconds, all in the opening minutes.

Pacers: Indiana fell to 6-21 in games where it trails after one quarter, and failed to shoot at least 50 percent for its ninth straight road game. … The Pacers have now had separate losing streaks of six, seven and eight games this season. … Indiana leads the season series 2-1 and plays host to Miami on April 5.

Heat: Miami’s 54-37 halftime lead was its largest of the season. … Miss Universe Gabriela Isler, who will relinquish her crown in Miami on Sunday, was in attendance. … C Hassan Whiteside (sprained ankle) warmed up and was active, but did not play. … C Chris Andersen finished with 13 rebounds, a season-high.

The Pacers got Hill – who had missed all but five of the team’s first 44 games this season with knee and groin injuries – back for the first time since Dec. 31. But Indiana lost guard CJ Miles in the first quarter with a sore left groin, after he scored eight points in the game’s first seven minutes.

Miami was outscored 27-21 in the third quarter, adding to the team’s baffling post-halftime trend. The Heat are 4-16-1 at home in third quarters this season, 10-29-4 overall.