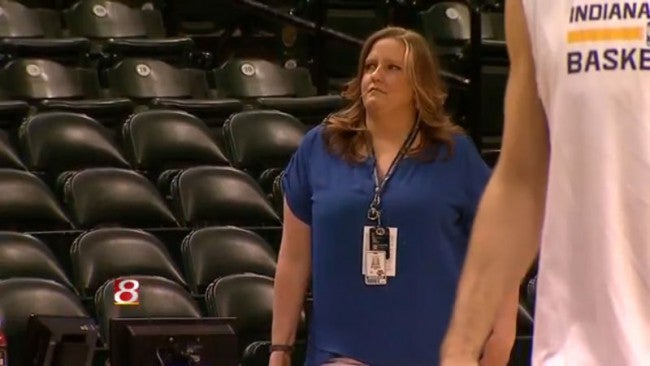 INDIANAPOLIS (WISH) – As a part of the Pacers’ public relations team for the past 13 years, few know the players and coaches like Pacers’ Senior Public Information Manager Krissy Myers.

“Eighty-two nights a year I watch basketball for a living,” said Myers. “How great do I have it?”

A big part of her job centers around getting some of the hottest faces in the NBA to interviews and other places they need to be, not always an easy task.

“You have to be forceful,” said Pacers head coach Frank Vogel. “These guys don’t want to do a lot of their media obligations and will try to skip out on them, and you have to hold them accountable the same way the coaching staff holds them accountable.”

“Growing up, I’m the baby of four kids, and the only girl, so I’m used to being the little sister who walks along and nags all the time and wants to do what everyone else is doing,” said Myers. “So walking behind them and nagging them to do something is just normal life for me.”

“The first couple of years, it was obviously [hard] because you’re nervous about how they’re going to react, but once they’re used to you, it’s kind of entertaining actually,” she added.

While she may be the little sister, she’s still one of the family to this franchise.

“She’s one of us. She’s one of the guys,” said Pacers center Roy Hibbert. “I appreciate her, and I treat her with lots of respect. She’s been down with me since day 1, when I was a rookie, so I appreciate everything she brings to the table to help me out.”

“She looks after us. She takes care of us,” said Pacers forward Paul George. “When it’s cold outside, she’ll lend her coat, so that’s just how great hearted she is.”