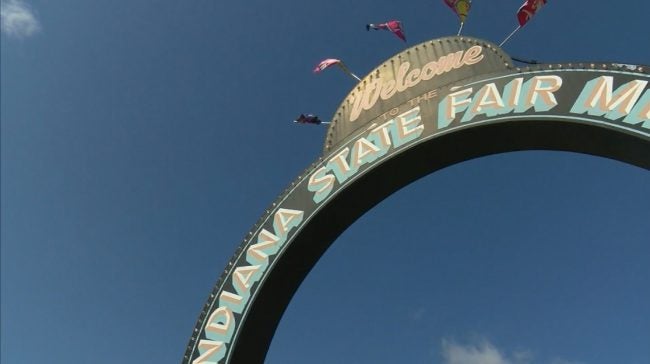 This year’s theme for fair is “The Wonderful World of Food,” featuring a different food each day. Friday’s theme is fried food, and representatives from Indiana Grown said it’s to emphasize the soybean oil used to fry much of the state fair’s corn dogs, elephant ears, Oreos and french fries.

Other than actual edible food, the Indiana State Fair boasts several events where food is part of the attraction, not the diet.

The Purdue Extension Agriculture Horticulture Building is hosting the fair’s annual cheese sculpture. Sarah Kaufmann has been the sculptor for 12 years and spoke to a crowd who gathered as she chiseled away at huge blocks of cheese.

Near the back of that building, wide-eyed children lined up to spit a watermelon seed across measuring tape on the floor.

“And… spit!” echoed the announcer, smiling at the kids. “Good job, get your ribbon.”

The watermelon seed-spitting contest is a classic Indiana State Fair event and happens in the Agriculture Horticulture building every day at 1 p.m. Fair staff reported 42 feet is the record, set in 2016.

Feats of endurance are not just for two-legged fair attendees: “Dock Dogs” is a jumping canine aquatic performance sport at the DOW Agro Sciences Building. Dogs leap off an elevated platform, flying 16 to 18 feet into a tank of water all for a big round of a-paws.

“It’s amazing how far they can jump,” said Jeff Alexander, a spectator with his family. “Lots of fun, a little splashing and water fun, which is great. Kids love it. They get to see the dogs,” Alexander continued.

The Indiana State Fair is also known for drawing people from all over the state, even multiple times a season.

“Last year I came eight times,” laughed Ashley Wible with her friend Krystal Wier. “We have a competition each year to see who can get here the most, and I beat her a lot. And it was great,” sid Wible.

There’s more to come after the sun sets Friday. Sharon Smith, communications director for Indiana State Fair, directs fair guests to the free smartphone app for a full schedule. She says Friday night in particular should be memorable.

“We have a wonderful tractor parade that people really look forward to,” said Smith, “We also have the Chevy Silverado Free Stage opening tonight with George Thorogood and The Destroyers.”

Our WISH-TV team caught up with Thorogood backstage before the big night. He said he loves coming to Indiana.

He laughed, joking about the price of tickets at the concert (it’s a free event) and how long his version of “Bad to the Bone” would last.

“I think you can only eat fried butter and look at a big pig for so long. They want some musical entertainment,” he said.