Business of basketball booming in Indy 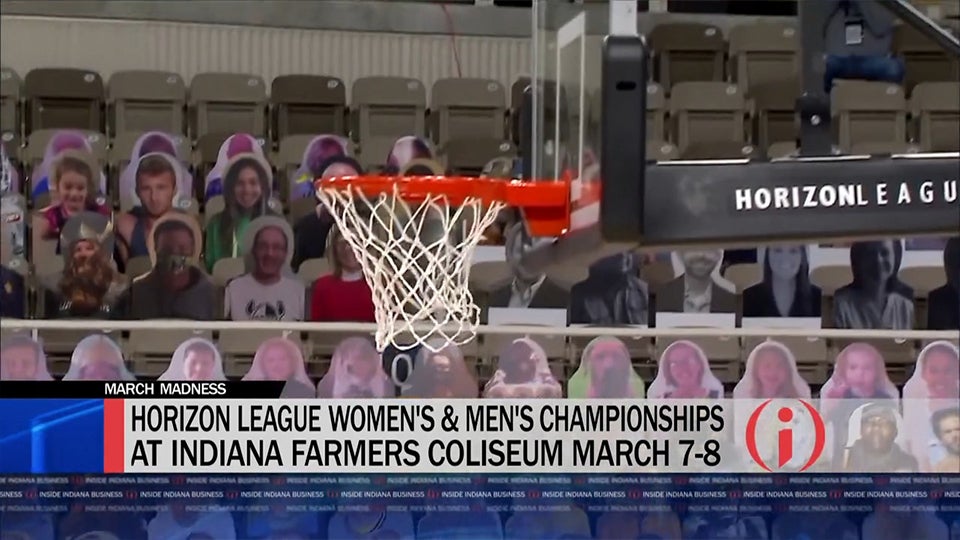 INDIANAPOLIS (Inside INdiana Business) — Unlike last year, Indianapolis will not host the entirety of March Madness, but that does not mean the city isn’t seeing its share of hoops action this month. The Big Ten conference last weekend crowned its women’s basketball champions and will kick off the men’s tournament Wednesday at Gainbridge Fieldhouse, while the Horizon League begins its men’s and women’s championships today at the Indiana Farmers Coliseum.

Additionally, the NCAA will host first and second round games later this month, and the Indiana Sports Corp estimates all of the events will generate up to $30 million in economic impact.

“This is a basketball city and I think March is just a special time of year; you can feel the energy downtown,” said Roe Lach, who is nearing her first anniversary as commissioner. “It’s not all of March Madness, but it sure is a huge chunk of it and we’re excited to be a part of it.”

The Horizon League is in its third year of hosting its championships in Indy and Roe Lach says the conference is looking to boost engagement.

“We’ve added some amplifying events around [championship] day,” she said. “So, we’ve really asked ourselves, ‘What can we build around that?’ and we’ve really built some significant events that we want the community to come out and enjoy.”

Among the events is the Esports Combine, which was announced last month. The event, which began Sunday and continues through Tuesday, will feature an NBA 2K showcase where top high school esports athletes will compete for college scholarships and recruitment opportunities.

On Tuesday, in recognition of International Womens Day, the conference will host an event showcasing women in sports.

The Horizon League will be the institutional host of NCAA games scheduled for March 17 and 19 at Gainbridge Fieldhouse. Roe Lach says the task is more than just having the conference’s name attached to the games.

“We’re responsible, essentially, for all of the operations in and around the game. So, we partner with the [Indiana] Sports Corp and we ensure that we’re taking care of all of the media, that we’re assisting with the team arrivals, with the band, the spirit, dance and cheer, and then also just ensuring that the game operations go off seamlessly.”

Roe Lach, who is also a member of the Indiana Sports Corp Board of Directors, says the city will work to continue its sports legacy.

“Indy wants to be at the forefront of what’s happening in sports, whether its esports now or more traditional sports,” she said. “When you think about basketball, that is part of our sports strategy. Of course, we’ve got more Final Fours coming our way, but now the NCAA has opened up the bid cycle for 2027-31 for men’s and women’s and we want to do all we can to put our best foot forward to a part of that and I’m sure we will.”