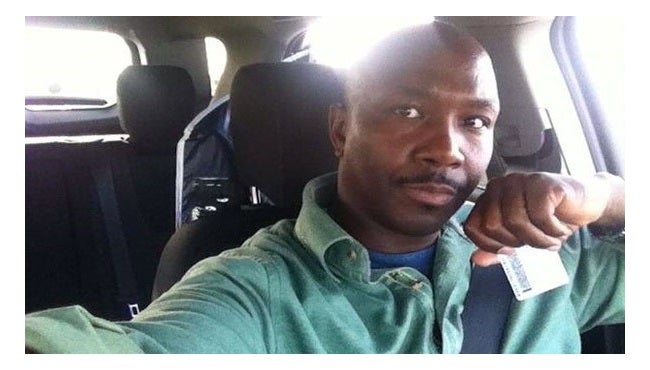 TAMPA, Fl. (WFLA) – A selfie is going viral on the web and it’s not the usual viral selfie taken by a movie star, athlete or celebrity. This selfie simply shows a black man sitting in the driver’s seat of a rental car.

Dwyane Bryant snapped the photo after he was pulled over by an Indiana State Trooper for speeding and cutting across three lanes of traffic.

Bryant describes himself as a transformational speaker. He is president of Chicago-based Inner Vision International, an organization that works with school systems to teach life management skills to kids.

Bryant was on his way to a speaking engagement in Battle Creek, Michigan when he was pulled over by the trooper.

Bryant momentarily thought about what happened to Sandra Bland when the white trooper pulled him over in the middle of nowhere in Indiana. “He could have done something and no one would have known,” said Bryant of the trooper who pulled him over.

Bryant then practiced what he teaches his students; be respectful and responsible. He thought to himself, “Dwayne, you need to be more respectful than you normally would.”

He said that his encounter with the trooper impacted him greatly. He realized just how much, after the trooper drove away. “I sat there for about 20 minutes. I was emotional.”

Dwayne said his experience proved something. “Not all officers are bad” and “You have to act responsibly.”

I JUST got pulled over by Indiana State Trooper!!Ok, I’m sitting in my rental car with tears in my eyes! I have a BIG speaking engagement in Battle Creek Michigan tomorrow morning. I’m going to Lite up ALL the teachers in the Battle Creek School district.So! I’m driving from Chicago to Battle Creek. I KNOW I was speeding, then, DAMMIT!!! Police officer had me in his radar. I pulled over…. He asked the Question, Do you know I stopped you. I asked, “was I speeding?”. He clocked me doing 85 in a 65. Then he said, you also crossed three lanes of traffic to pull over without signaling.I thought… SH….!!! This is what happened to Chandra Bland!! I KNEW, I would determine the outcome!I was calm, was respectful, told the officer WHO I was (showed him by my actions WHOSE I WAS) and what I was doing and where I was going. He took my license and said, ” sit tight.”After about 5 min. He came back with a citation. He told me in Indiana, he coulda written me up for reckless driving because I was going over 20mph. Instead, he was only going to give me a $150 ticket.I said, thank you officer, I know I was wrong by speeding. I appreciate your kindness you have shown me. (I was really sincere!… Straight from the heart). I asked him could I take a pic because I wanted to post this experience because I’m always talking to my students about THEIR responsibility when pulled over by Authority.He asked me to give him back the ticket. I didn’t know what was about to happen, but I had NO fear during the entire encounter.He tore up the ticket, told me to sit tight, then he brought back a WARNING instead of a ticket.I am crying in my car, because God is SOOOO faithful! I sincerely believe, in MOST instances, it is OUR ATTITUDE, OUR BEHAVIOR, OUR RESPONSE that dictates the officers response.There is so much more to say, but I gotta get back on the road!#Smiling!#Thankful#GodIs#PleaseShareWithOurYouth!