McLaren to return to full-time IndyCar racing in 2020 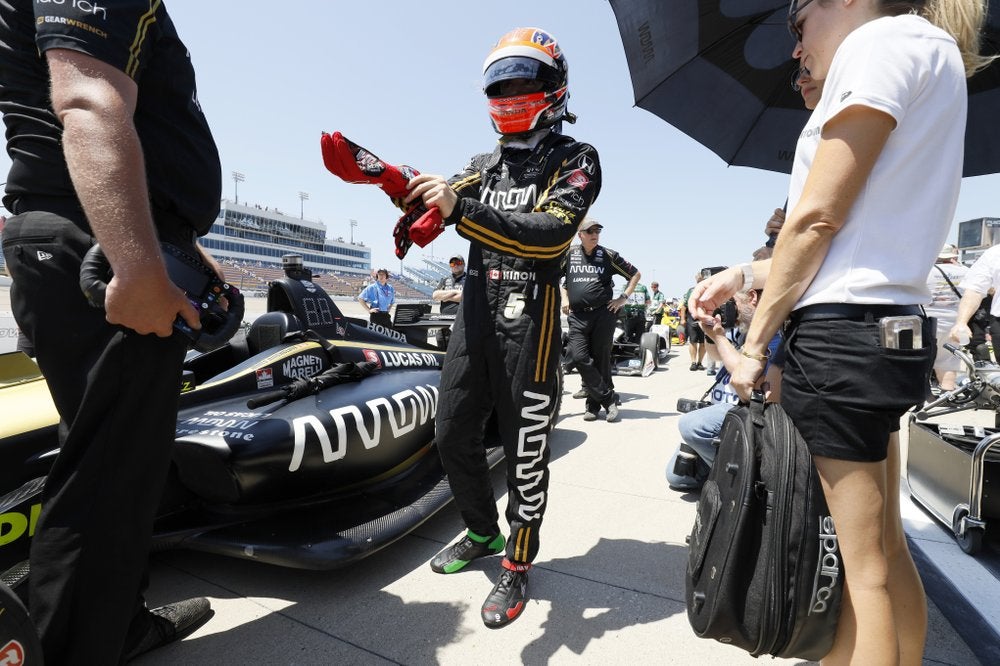 FILE - In this July 19, 2019, file photo, James Hinchcliffe stands next to his car during qualifying for the IndyCar Series auto race at Iowa Speedway in Newton, Iowa. McLaren will return to full-time IndyCar competition next season for the first time since 1979 in a partnership with existing team Arrow Schmidt Peterson Motorsports. The new venture will be renamed Arrow McLaren Racing SP and rely on Arrow SPM's current infrastructure.(AP Photo/Charlie Neibergall, File)
by:
Posted: Aug 9, 2019 / 09:54 AM EST / Updated: Aug 9, 2019 / 09:54 AM EST

(AP) – McLaren will return to full-time IndyCar competition next season for the first time since 1979 in a partnership with existing team Arrow Schmidt Peterson Motorsports.

The new venture will be renamed Arrow McLaren Racing SP and rely on Arrow SPM’s current infrastructure. McLaren will be responsible for technical expertise, commercial experience and marketing. It will be a two-car team but switch next season to Chevrolet.

“IndyCar has been part of McLaren since our early years of racing, and the series today provides not only a commercial platform to continue to grow our brand in North America, but competition with some of the best teams in international motorsport,” said Zak Brown, CEO of McLaren Racing. “We come to IndyCar in full respect of the sport, our competitors, the fans and the task ahead.

“At our core, we at McLaren are racers and where there’s competition that puts us to the test, we will race.”

The team currently fields cars for James Hinchcliffe and Marcus Ericsson, but Hinchcliffe is a longtime Honda ambassador and star of ads for the automaker in North America. All seven of Schmidt’s IndyCar victories were powered by Honda, which also helped the team win two Indianapolis 500 poles.

Honda Performance Development said in a statement Friday “although we regret that this partnership will be coming to an end … HPD has the utmost confidence in the strength and commitment of its remaining partner teams.”

Arrow Electronics will remain the team’s title partner and team co-founders Sam Schmidt and Ric Peterson will continue in their current leadership roles.

“I’m extremely proud of the team that Ric and I have built and that a legendary brand like McLaren Racing has decided to partner with us,” Schmidt said. “Arrow is a tremendous partner which has been integral to our growth as a team since 2015 and to the creation of this new partnership. The combined technical resources and commercial opportunities both McLaren and Arrow bring to the table provide a winning combination.”

Gil de Ferran, the sporting director for McLaren Racing, will lead the IndyCar effort for McLaren independently from the Formula One effort.

“IndyCar is a natural fit for McLaren, given our legacy and determination to succeed at the top levels of international motorsport,” said de Ferran, a former Indy 500 winner. “Our ambition, over time, is to consistently compete for wins and championships.

“We acknowledge the challenge ahead of us but McLaren is committed to this partnership and to supporting the team as a whole.”

McLaren is coming off a spectacular embarrassment in which it failed to qualify for the Indianapolis 500 in May with celebrated two-time Formula One champion Fernando Alonso.

Alonso does not appear to be interested in a full-time IndyCar ride in 2020, but Brown has indicated the new team will field a third car for the Indianapolis 500. Alonso would likely have an option to drive that entry.