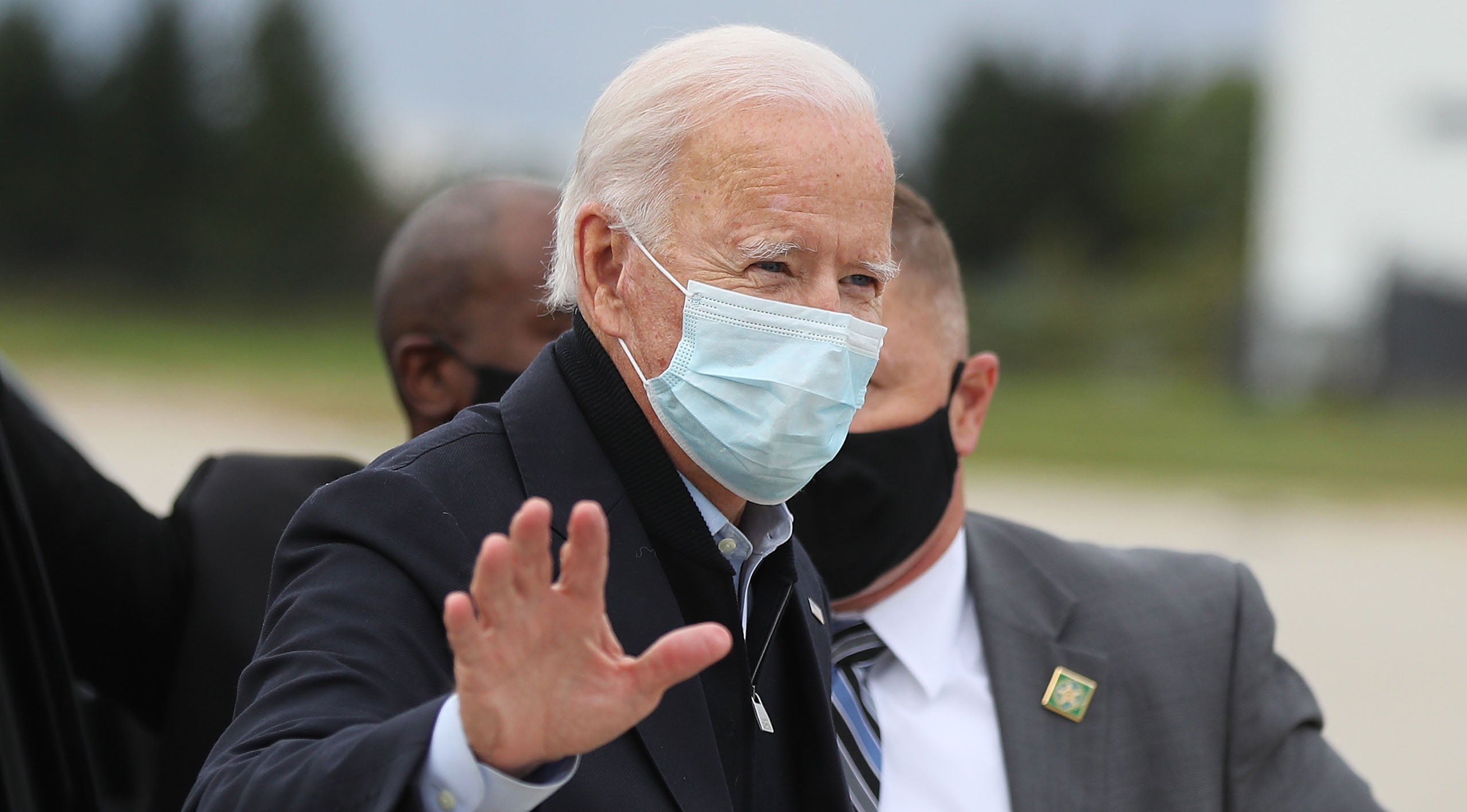 (CNN) — Joe Biden said President Donald Trump‘s positive test for coronavirus is a bracing reminder of the seriousness of the pandemic.

“We have to take this virus seriously. It’s not going away automatically,” the former vice president said Friday in a speech during a pared-back trip to Michigan that followed Biden testing negative for the virus in the morning. “We have to do our part to be responsible. It means following the science, listening to the experts, washing our hands, social distancing. It means wearing a mask in public. It means encouraging others to do so as well.”

Wearing a mask and standing in front of an American flag in the parking lot of a union hall in Grand Rapids, the Democratic nominee said he and his wife, Jill Biden, send their “prayers for the health and safety” of Trump and first lady Melania Trump, who also tested positive.

He also implored Americans to wear masks — a message he has delivered for months, but with political implications that were difficult to miss after Trump’s entourage had ignored the Cleveland Clinic’s rules requiring masks at Tuesday night’s debate, while Biden’s guests wore masks.

“Be patriotic,” Biden said. “It’s not about being a tough guy. It’s about doing your part. Wearing a mask is not only going to protect you, but it also protects those around you. Your mom, your dad, your brother, your sister, husband, wife, neighbor, co-worker. Don’t just do it for yourself. Do it for the people you love, the people you work with.”

The Michigan trip was the first glimpse at how Biden might campaign after Trump’s positive test. The Democratic nominee scrapped a second planned stop at a local Democratic headquarters, citing the expected crowd size and more cramped quarters.

Additionally, Biden’s campaign is pulling its negative ads Friday, going with all-positive messages after Trump’s test, a campaign aide said. The aide said the decision to pull negative ads was made before the White House announced Friday evening that Trump was going to Walter Reed medical center for a few days.

In response to the Biden campaign’s decision to pull negative TV ads while the President is hospitalized, spokesman Tim Murtaugh told CNN the Trump campaign will not make a similar move.

Biden said he had been tested twice Friday — including once by Dr. Kevin O’Connor, his former White House physician — and that “everything’s clear.”

After Trump said on Twitter in the early morning hours Friday that he had tested positive, the first word from Biden’s campaign on his own health came in a statement from O’Connor.

Biden’s campaign then said he would travel to Grand Rapids as planned — though several hours late, and with a leaner schedule. He had initially planned to follow that speech at a union hall with a virtual fundraiser and a stop at Kent County Democratic headquarters for a voter mobilization event.

Asked why Biden decided to move forward with the Michigan trip, a Biden aide said: “Vice President Biden tested negative and was not in close contact with President Trump. He also wore a mask at all times, except for when he was on stage. And we implement social distancing, mask wearing, and other best practices in all of our campaigning.”

Biden’s supporters argued that it would be safe for the former vice president to hit the campaign trail Friday even after standing on stage with Trump for 90 minutes earlier in the week.

“Everybody who is in Biden’s world has gotten tested today — I’ve been talking to everybody,” Michigan Democratic Rep. Debbie Dingell told CNN.

“I think that what’s important to remember is that the Biden campaign followed the rules from the beginning, and so the danger point for them was being in Trump world, when the Trump family and President didn’t wear masks. But (Biden) has tested negative and other people are, and they’re obviously being careful. But they’ve been careful from the beginning,” Dingell said.

The former vice president’s running mate, California Sen. Kamala Harris, and her husband, Doug Emhoff, were also tested for coronavirus on Friday morning, with negative results, a campaign aide said. The two would continue on their planned travel to Las Vegas for Harris, and Greensboro, North Carolina, for Emhoff, the aide said.

The negative tests come after Biden and Trump’s podiums were placed 12 feet and 8 inches apart during Tuesday night’s debate, according to a source with knowledge of the debate set-up.

There was no contact from the Trump campaign or the White House to alert the Biden campaign of possible exposure, a senior Biden campaign official who was with the former vice president at the debate said. That aide said Biden’s campaign believes there is not much risk because “we were never near them.”

“Jill and I send our thoughts to President Trump and First Lady Melania Trump for a swift recovery. We will continue to pray for the health and safety of the president and his family,” Biden tweeted Friday morning.

O’Malley Dillon also told Biden’s campaign staff to “rest assured that our campaign staff, in consultation with health experts have continued to take every precaution to protect Vice President Biden, Sen. Harris, their spouses and our staff. The health and safety of the entire team has been, and will remain, our number one priority.”

At Tuesday night’s debate, after Trump’s entourage of family and administration officials entered without masks, a Cleveland Clinic doctor approached Trump’s guests, asked them to wear masks and offered masks to them, according to a reporter who observed what was happening in the room before the debate.

When the doctor, who declined to comment to the press, walked off the floor, a debate hall staffer told her, “That’s all you can do.”

“Why is the Trump family allowed to not wear masks in the debate hall while everyone else follows the rules?” Biden’s granddaughter Naomi Biden tweeted Tuesday night as the debate started.

The Cleveland Clinic did not directly address Trump’s guests ignoring mask rules, but said in a statement Friday, “Individuals traveling with both candidates, including the candidates themselves, had been tested and tested negative by their respective campaigns.”

“Based on what we know about the virus and the safety measures we had in place, we believe there is low risk of exposure to our guests,” the clinic said.