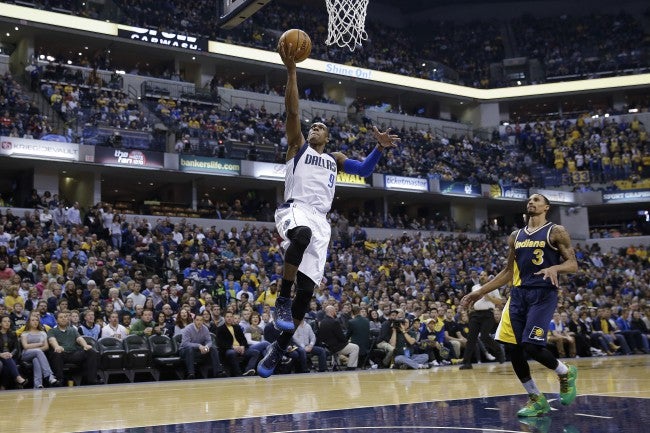 INDIANAPOLIS (AP) – C.J. Miles scored 28 points and made a key 3-pointer with a minute left to help the Indiana Pacers beat the Dallas Mavericks 104-99 on Sunday night.

The Pacers won for the second time in nine games to pull even with Boston for the eighth and final playoff spot in the Eastern Conference.

Chandler Parsons led Dallas with 27 points. The Mavericks have a comfortable lead over Oklahoma City for the No. 7 seed in the West.

Indiana trailed 68-61 early in the third quarter, but pulled to 79-78 heading into the fourth.

The Pacers used an 8-2 flurry midway through the fourth to take a 97-91 lead.

After Dallas rallied to tie it 97, Roy Hibbert broke the tie two free throws and Miles followed with the 3-pointer. Parsons’ 3 to force overtime in the closing seconds came up short.

But the Mavericks still nearly found a way to pull off a split in the season series.

Instead, the Pacers who desperately need wins to make a final push for the playoffs rallied in a back-and-fourth final quarter. The lead changed three times in the first four minutes of the fourth, but after George Hill scored all of the points in an 8-2 Indiana run, the Mavs never led again.

Dirk Nowitzki scored 19 points, and Rajon Rondo had 17 points and 10 assists for Dallas.

Hill finished with 14 points, four rebounds and five assists for the Pacers.

Mavericks: Dallas started the fourth quarter 6 of 10 from 3-ponite range but missed all five of their 3s in the final quarter, including the one that could have forced overtime. They wound up going just 40 percent from beyond the arc. … Coach Rick Carlisle remains five wins behind Don Nelson’s franchise record (339). Carlisle is third on the Pacers’ career wins list, too, with 181.

Pacers: Indiana started fast, making its first six 3-pointers – all in the first quarter. Eventually, the percentages caught up. The Pacers missed their next five 3s. That streak ended when Rodney Stuckey made a 3 to give Indiana an 89-86 lead with 6:11 left in the game. Hill made the next two. Indiana wound up 10 of 17 on 3s.

Pacers: At Brooklyn on Tuesday night.