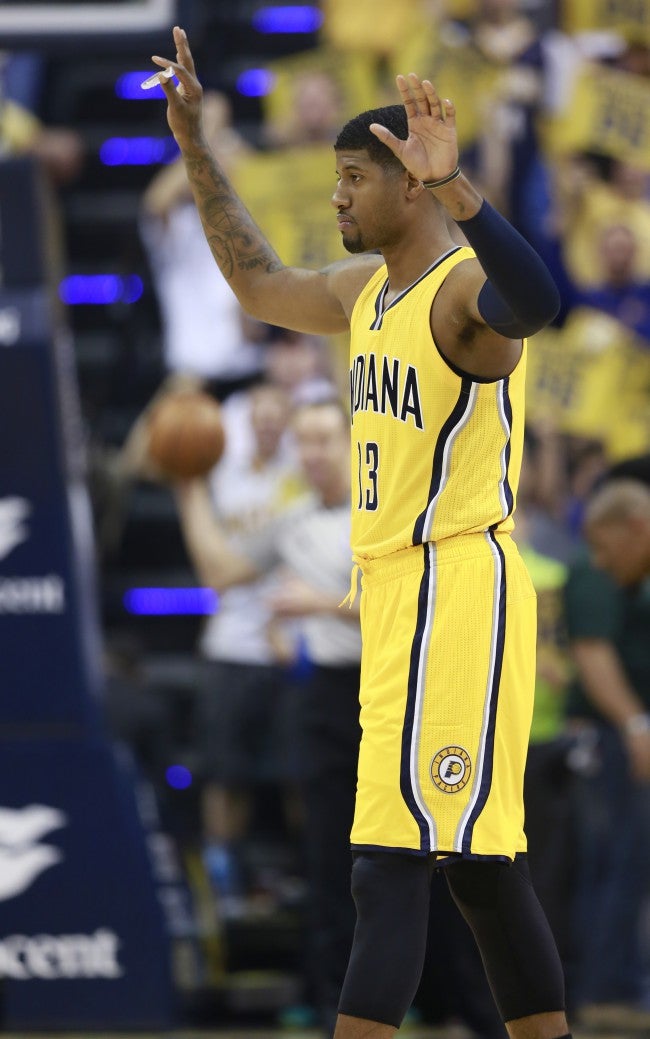 It was quite a season debut for George, a little more than eight months after his right leg snapped during a Team USA scrimmage in Las Vegas — and much sooner than anyone anticipated when the gruesome injury occurred Aug. 1.

“There have been a lot of injury stories this year, but that’s one of the good stories,” Spoelstra said about 75 minutes before tip-off between the two teams that met in the last two Eastern Conference finals. “We all saw it on TV. Even from a competitor’s standpoint it was great news to see that he was back out on the court. Even though it has to come on our game, who cares? The fact that an injured player is back – we’re not hiding from competition.”

The Pacers aren’t hiding from reality, either.

Coach Frank Vogel plans to use George off the bench for about five to seven minutes in each half against Miami. Team consultant Donnie Walsh acknowledged nobody inside the organization expects George to look like his old self this season or to become the catalyst for one last-ditch playoff push.

But that’s not what this game was about.

“I was so sad (when he got injured) I cried,” said 47-year-old Lisa Spohn of nearby Carmel, Indiana. “I think I’m going to cry (when he plays) tonight. We were going to sell our tickets to a man from Australia and then the news came out and we said, ‘We can’t. Sorry.'”

George’s return gave the game an opening-night feel, too.

Team officials handed out signs that read “Welcome Back PG.” Some of those inside George’s own rooting section held up placards with the words “Young Trece,” George’s new nickname. The crowd roared when George appeared from the tunnel, again when the large screen above the court had a close-up of George’s beaming smile and a third time during pregame warmups.

Television cameras were trained on the Pacers’ tunnel – until George walked out in his uniform and warm-up clothes for the first time this season – and the stands filled up with fans earlier than usual.

And the cheers weren’t just coming from Pacers fans.

“He’s handled everything magnificently,” Krzyzewski said during a news conference Sunday just a few blocks away from the Pacers’ home floor. “Certainly we hope that he has a complete comeback and helps the Pacers in their playoff hunt.”

Krzyzewski was coaching the American team when George was injured. He invited George to return to Las Vegas this summer for a three-day event for players who hope to be on the 2016 U.S. Olympic Team.

Dempsey came to town to present George with honorary dog tags in a pregame ceremony to make up for the one George missed with the other American players before last summer’s trip to Spain for the World Cup.

It was a surreal scene.

Less than 30 hours after the team made the official announcement that George would return Sunday, reporters surrounded George’s locker only to be told he wouldn’t talk until after the game.

But that didn’t matter to those who were to watch George play.

“I’m not expecting the Paul George that’s going to be dunking and all of that,” said Chris Rains, a 37-year-old resident of nearby Avon, Indiana. “I understand that he’s not going to be awesome, but I think he’s still going to be good.”