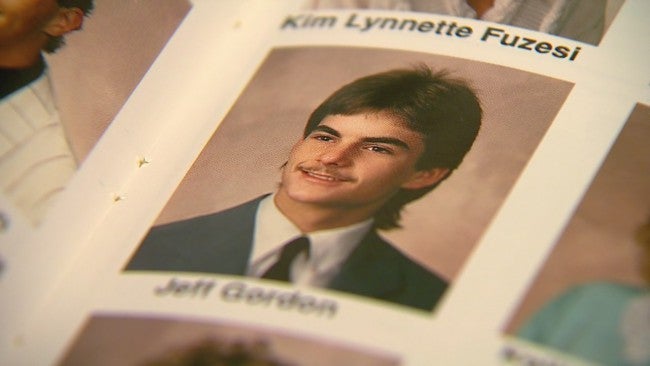 PITTSBORO, Ind. (WISH) – For all the talk about Pittsboro as the Hoosier hometown of Jeff Gordon, Lizton can claim a proud place in his development, too.

Gordon attended Tri-West High School in Lizton as a member of the Class of ’89.

In the days leading up to Gordon’s final Brickyard 400 appearance, 24-Hour News 8 visited with some of Gordon’s teachers.

Their names are Ron Ward, Walt Dininger, Steve Williams, Don Durrell, and Jim Coon – but they say even now Gordon never calls them that.

“You would see him at an event someplace, it would be, ‘Mr. Coon, Mr. Durrell, Mr. Williams,'” explained Coon. “He was very, very respectful.”

Durrell says Gordon was a great math student, earning A’s each year. But he also says Gordon never tried to grab a spot on the front row in class.

“And he always went right to the back, yes!”, says Durrell, pointing out the seat Gordon used to grab.

The men say the prize tale and treasure from that era is the story behind a framed sheet of paper with a series of numbers on the margins and an “A+” at the bottom.

“That’s his report card from Driver’s Ed,” says Dininger, with a chuckle.

Dininger says he taught driving for more than 30 years and gave Gordon the only perfect score in that entire time. He says the speedy youngster had no problem keeping it below 50 mph.

Williams, who never had Gordon in class, says they often talked racing in the hallways, and have caught up several times since then.  With a grin, Williams tells of a time early in Gordon’s NASCAR stardom when Gordon showed Williams around the team’s racing shop and eagerly offered goodies from sponsors.

“We talked a while and he said, You want some Pop Tarts?” Williams recalled, laughing deeply at the memory. “He had a whole skid full of Pop Tarts!”

Asked to sum up Jeff Gordon’s time at Tri-West, the men who steered him in school called him a solid student, a great sports fan, and a nice young man who, even at age 13, loved to talk racing with everyone.

For more stories and smiles, watch the video version of this story.