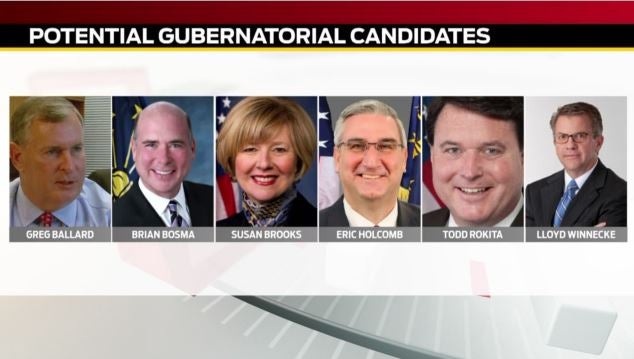 INDIANAPOLIS (WISH) — The search will soon begin to find the replacement for Mike Pence as Governor of Indiana with just four months until the general election.

24-Hour News 8 learned there are at least six potential replacements. The list includes congressman to former and current city mayors.

Mike Pence has until Friday afternoon to drop out of the governor’s race making way for another candidate to go up against democratic nominee John Gregg.

“Well, obviously we’ll have another candidate for governor and I think it’s good for both republicans and the democrats in the state,” said Laura Albright, assistant professor of political science at University of Indianapolis.

“So that opens up a pool for someone who might be more competitive than Pence,” she said.

One of the top contenders is congresswoman Brooks, who recently served on the Benghazi committee and questioned Hillary Clinton.

Another contender is Lieutenant Governor Eric Holcomb. He took office this past March after dropping out of a bid for the U.S. Senate.

“For whoever’s running for the republican ticket as governor they need to file and then immediately start their campaign because we’re already half way through July the Republican National Convention is next week and the balls rolling they need to get into the game,” she said.”

Other names on that list: Lloyd Winnecke and Greg Ballard.

Winnecke is the Mayor of Evansville. He told 24-Hour News 8 he received phone calls about running but has not made a decision.

Ballard the former Mayor of Indianapolis did not respond to our message for comment.

But in the end, it will be up to a committee with the Indiana Republican Party to decide on the nominee.

“Regardless of who they pick they want to find someone who has state wide recognition and can really speak to the issues,” she said.

24-Hour News 8 reached out to the Indiana Republican Party for a comment, but did not hear back.

A spokesperson for Rokita said, “After Governor Pence officially vacates his position on the ballot, Rep. Rokita plans to announce his intention to run to replace him as the Republican nominee.”