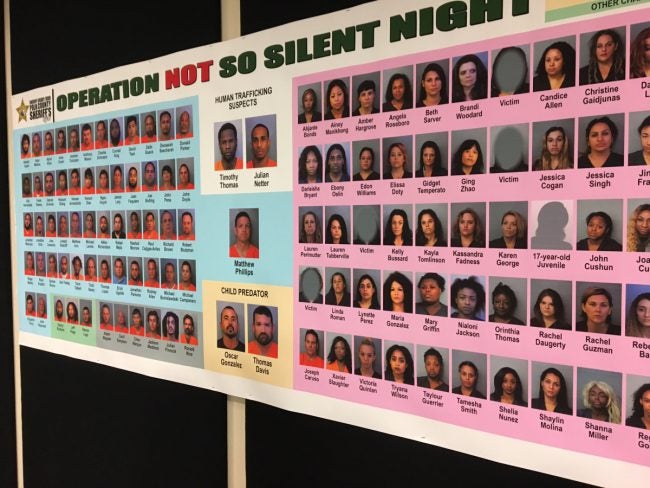 POLK COUNTY, Fla. (WFLA) – Detectives in Polk County have arrested a total of 114 suspects after a six-day-long undercover operation focusing on human trafficking and those who advertise prostitution services online.

“Operation Not So Silent Night” ran from Thursday, December 8 through Tuesday, December 13. Of the 114 arrested is 42-year-old Matthew Phillips, Ph.D., who is the Director of Elementary Curriculum at the Osceola County School Board. He allegedly arrived at the undercover location to have sex with a prostitute.

Officials said Phillips told the undercover detective he needed to do a “cop check” when he arrived, and allegedly grabbed her.

Also arrested was 50-year-old Matthew Irvin of Oakland, who detectives say told his wife he was going out to buy Christmas presents for his children, but came to the undercover location instead, to have sex with a prostitute. Also arrested, 33-year-old Erik Hernandez of Kissimmee, who detectives say setting up for his 9-year-old daughter’s birthday party that same day, and went to the undercover location to have sex with a prostitute.

Another case, 40-year-old Michael Bonislawski of Davenport, allegedly left his pregnant wife was at home the same day their baby was due, and showed up to the undercover location.

Also arrested was a corrections officer with the Federal Bureau of Prisons in Coleman, Florida, and a 20-year retired police officer from Puerto Rico.

The sheriff’s office confirmed in a press conference that one person arrested if believed to be part of an international sex-trafficking ring, but did not identify the suspect.

Collectively, all suspects have over 600 previous charges.  Twenty-eight of them admitted to investigators they are married.

The sheriff’s office also confirmed one female suspect had been charged previously with knowingly trying to transmit HIV/AIDS and spit on detectives while she was being arrested during the sting.

We are exceptionally pleased that we were able to potentially identify four victims of human trafficking, which is the goal of this operation. We are thrilled that we arrested two men who prey upon children, preventing them from doing so. We are extremely disappointed that we arrested a high-ranking official within the Osceola County School Board, whose occupation focuses on teaching and mentoring children.” – Grady Judd, Sheriff