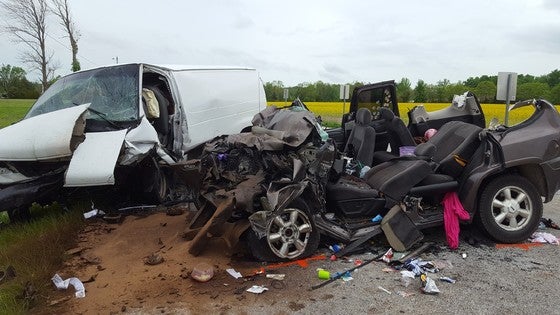 Police said a 2008 GMC SUV driven by Natashia Peters, 23, of Lawrenceburg, was traveling southbound on US 421 when for an unknown reason the vehicle crossed the center line into the northbound lane. Brian Johnson, 44, of Osgood, was driving a 2015 International truck northbound and was able to avoid Peters’ oncoming SUV.

Johnson drove the truck off the road and into a nearby field.

Another vehicle, a 2003 Ford van, driven by Brandon Yeary, 24, of Indianapolis, was traveling behind Johnson’s truck. Yeary was unable to avoid Peters’ SUV and the vehicles collided head-on.

Terry Dykes, 33, of Indianapolis, who was a passenger in Yeary’s van was taken by ambulance to Margaret Mary Hospital in Batesville, Ind. before later being airlifted to University of Cincinnati Hospital with serious injuries.

Johnson was not injured in the crash. US 421 was closed for nearly four hours after the crash.

Police said toxicology results on the drivers are pending and the investigation is ongoing.