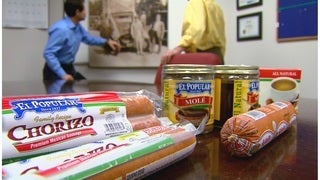 VALPARAISO, Ind. (WISH) — El Popular is the oldest chorizo manufacturer still in business in the country.

The business was founded by Vicente Garza, a Mexican immigrant, back in 1927. It started in East Chicago, where it currently holds its headquarters. The manufacturing plant is now in Valparaiso.

El Popular is as popular as its name suggests.

The Garza family attributes the brand’s success to the recipes Vicente Garza and his wife brought over from Mexico. They have kept the business within the family through three generations.

The company has persevered through some very difficult times, including the Great Depression.

Richard Garza was born and raised in East Chicago. He says he remembers helping his parents with the business along with his siblings.

“Since a little boy, I helped my dad wrap the cheese or the chocolate, just medium work,” Richard said. “It was difficult because depression was on. There was a lot fewer people to sell to.”

Richard claims that his father was not the only one making and selling chorizo and other traditional Mexican products.

“There was no large distributor of any kind. There was a lot of people that made homemade and they would sell it to the local retail store but not in a large way. So my dad was the first one,” Richard said.

“He had a car. He would take the backseat out of his car and that was his truck. And many times, he lived from day to day. And we never suffered, we always had food on the table. We did well, but that was my father working 16 hours or better.”

He says El Popular is following Vicente’s tradition in manufacturing three key items: chorizo, mole and chocolate. In its beginnings, El Popular also made queso, but the company has long left that line of products, as they belong to a different industry.

The heritage of El Popular goes well beyond its success as a business. The Garza family has inadvertently helped spread the flavors of the Mexican cuisine across Indiana.

“The anglo did not know nothing about Mexican food except the people from the steel mills. They took their sandwiches, the Mexicans took their tacos and they exchanged at work. Tacos for sandwiches and sandwiches for tacos and people started learning about it,” Richard said.

Edwards says he believes chorizo is becoming more mainstream in the last decade, which is helping the hyper-local business.

“We buy our pork from farms in Indiana, and every day we’re producing chorizo.” Edward said. “These are recipes that were brought in from Mexico. My grandfather started in 1927 so we’re on our 91st year. And we still hold to those recipes that he brought with him.”

Chorizo is a staple of Mexican heritage, made right here in Indiana, and served in restaurants and dinner tables across the United States.

“I’ve had a long history, and I feel blessed,” Richard said.