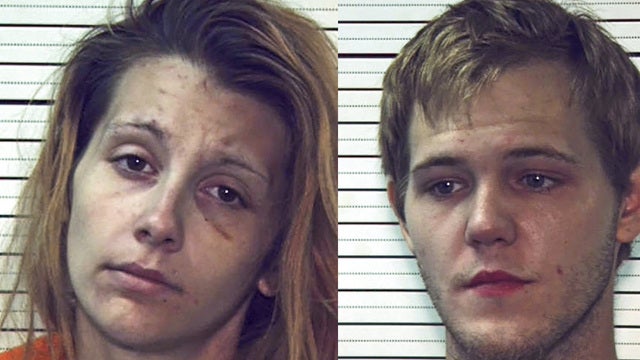 (AP) – A couple baby-sitting four children subjected at least two of them to physical and psychological terror over six days, making a girl drink dog urine, knocking out her brother and inflicting beatings that left visible injuries and required their hospitalization, police said.

Police said the victims’ mother paid Frye and Hills $100 to watch her four children — while she vacationed in North Carolina for a week in late July — at a house trailer in the town of Rome, near the New York border.

A 9-year-old girl appeared to suffer the worst abuse, including being tied to a cabinet by the wrists until her hands turned purple and being forced to lick her own urine from a wooden floor after she was not allowed to use the bathroom for an extended period, police said.

When her mother picked her up on July 27, police said, the girl complained of an aching back, said she felt as if she was about to pass out, was heavily bruised and showed difficulty walking. An ambulance was summoned, and the hospital called police.

A nurse told investigators the girl suffered a possible ankle sprain, was dehydrated and showed severe injury or stress to her muscle tissue. A police investigator observed bruising all over both children’s bodies, including the girl’s “extremely swollen and red” ears.

One of her sisters said the girl was picked up repeatedly by the ears.

The mother told police Frye and Hills explained the bruises by telling her the children had been throwing themselves against a wall and that a dog crate had fallen on the 9-year-old.

Investigators learned the harrowing allegations in interviews with the two children, their two sisters and another child, a 14-year-old boy.

They recounted how the girl was forced to run in place with a 5-gallon jug tied to her body, and to hold a “plank” position while nails would puncture her feet if she moved.

The girl was also kept awake for 24 hours, on some days she wasn’t fed at all, and she was tied to a dog crate by her waist and hands, police said.

Her 8-year-old sister said the girl was forced to drink dog urine through a straw, police wrote.

The 9-year-old girl told an interviewer “they treated the dogs better” than they treated her and her brother, according to the arrest affidavit. She recounted that Frye threatened her to keep quiet about his alleged attacks or “he would ‘come for her,’” police said.

The child told police she was tied up because she was crying for her mother, and was being abused. She said her head was “smashed” against a bedroom door and the refrigerator “numerous times,” police wrote. Frye and Hills are accused of beating children with their fists, a metal stove handle and a belt.

Frye stood on the back of the 7-year-old boy while he was in a “push up” position until he passed out, police alleged, and a 10-year-old sister told investigators “they woke him up by putting his head under water.”

The couple allegedly had the 14-year-old boy beat up the 7-year-old boy, police also said.

Court records list Frye and Hills as residents of Rome and of Towanda, a neighboring town. A preliminary hearing is scheduled for Aug. 14.