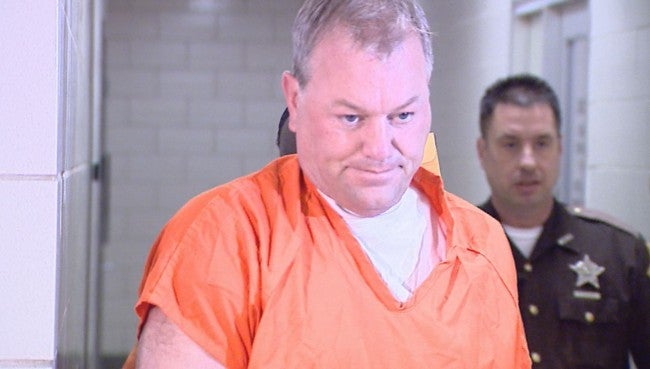 INDIANAPOLIS (WISH) Bond was set Wednesday at $100,000 for Glenn Hults, the so-called 5th suspect in the 2012 south side explosion at Richmond Hill.

Hults, 48, was charged Tuesday with one felony count of conspiracy to commit arson.

Prosecutors say he was part of a conspiracy behind the explosion in the Richmond Hill neighborhood that killed Dion and Jennifer Longworth and damaged nearly 80 homes in November 2012.INITIAL APPEARANCE

As he appeared in court for the first time Wednesday, Hults’ attorneys asked Judge Sheila Carlisle to reduce his bond.

“We believe the bond is unnecessarily high for someone who has lived here for a long time, who has worked uninterruptedly, and has no significant criminal history. He has a misdemeanor battery charge in his history, that’s it,” said Hults’ attorney Ralph Staples.

A bond reduction hearing is set for next Friday.

Following the conclusion of his five-minute initial appearance, Staples also argued that Hults never should have been charged in the first place.

“Conspiracy is one of those powerful arrows in quiver of the prosecutor. Sometimes they hit the target. Sometimes they shouldn’t even shoot at the target. In the movie Goodfellas, when Paulie is talking to Henry, he says: some guy goes to jail for the rest of his life just because he said hi to someone? It happens,” Staples said.CONSPIRACY ALLEGATIONS

But, prosecutors claim Hults was involved in a plot from the very start.

As I-Team 8 was first to report in January, the scope of Hults’ alleged involvement was first publicly revealed by Monserrate Shirley after she agreed to a plea deal with prosecutors in early January 2015.

As part of that plea agreement Shirley agreed to testify against her co-defendants, and named Hults during interviews as having first had conversations with her boyfriend at the time Mark Leonard on July 4, 2012 about plans to set fire to Shirley’s house. This conversation occurred, Shirley testified, while the three were attending a pool party at a home near Geist Reservoir.

Shirley said she and Leonard had been invited to the party by Hults, who she described as Leonard’s “friend.” According to court documents, Leonard asked Hults to convince Shirley that it would be “easy” to submit an insurance claim if she had a fire in her house.

“He was active in encouraging Ms. Shirley to participate,” said Marion County Deputy Prosecutor Denise Robinson following Wednesday’s hearing. “And, we also know from the affidavit that he kept (Shirley’s daughter) on three consecutive weekends–the weekends that (the explosion attempt) failed and then the weekend when it succeeded.”

Hults hasn’t denied that he allowed the teen girl to stay over at his house, nor that he was acquainted with his now co-defendants.

But, court records cast questions about how deep the acquaintance truly went. In the charging documents against him, Hults admitted to detectives that that he had received a check for $70,000 from his insurance company after a fire in his own home that he attributed to a faulty tanning bed. He told detectives that Gary Thompson, the man charged as the fourth suspect in the Richmond Hill explosion case, installed the tanning bed and had done other electrical work at his house.

Staples declined to comment on the previous fire, saying he hadn’t spoken with Hults about it.

But, he claimed much of prosecutors’ case against Hults is circumstantial, and based on Shirley’s word against Hults’.

“Conversations are just that: words. In order to prove a conspiracy you have to have some intentional action. Knowledge ain’t enough,” Staples said.CHARGING DELAYS

“Political office holders are under pressure to do things. And, they’ve said numerous times: we’re going to investigate and investigate and round up everybody that’s involved. So, I’m not surprised,” he said.

But Robinson claimed the delay was due to the logistics of their investigation.

“Primarily it was to get Ms. Shirley sworn and take her deposition, which was just completed about a week ago. There was always that consideration (to file charges against Hults). We don’t just rely on he said/she said. We have corroborated some of the facts, and based on that corroboration, we believed there was probable cause to proceed with the filing of the charge,” Robinson said.

Hults has asked to be tried separately from the other four defendants, a motion Robinson said she’s not likely to oppose.

He’s scheduled to appear in court again on June 10 to prepare for a June 15 trial date that prosecutors said is almost all but certain to be delayed.

In the meantime, Robinson called the possibility of a plea agreement in exchange for Hults’ testimony against the other four defendants unlikely. But, she stopped short of ruling one out.

Staples, on the other hand, was more direct.

“He’s already spoken with detectives,” he said. “He can’t tell the government what he doesn’t know.”