Burmese refugees first-time homeowners thanks to Habitat for Humanity 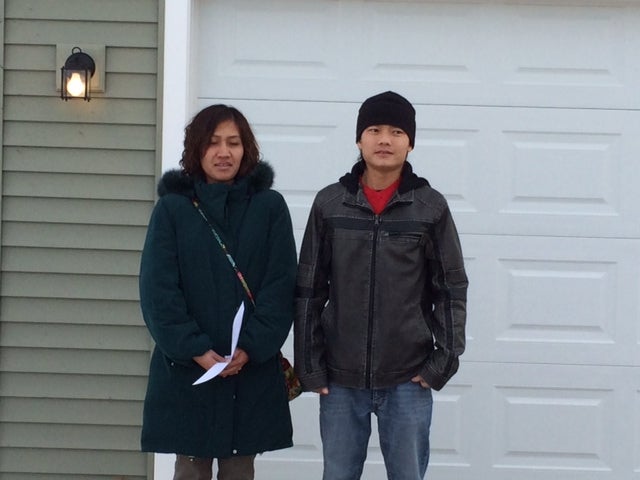 FORT WAYNE, Ind. (WANE) –  From a Burmese refugee camp to Matilda Jane Cove, one Fort Wayne family has come far in more ways than one. It’s been a long journey for Poe Shee and his wife, Paw Lay Moo. They came to the United States seven years ago, and Friday afternoon, they received the keys to their first home.

“Poe’s story is really powerful. He came to us about two and a half years ago, got into the program, and was also looking for work. We actually had an opening on our construction team, and he came on board as one of our site supervisors. He’s been working on the Habitat stuff for a little over a year and a half now. It’s just a joyous day to be able to tell him and one our own, welcome home,” Fort Wayne Habitat for Humanity CEO Justin Berger said.

WISH-TV News 8’s sister station WANE News said Poe didn’t help build just his own house. In fact, he’s had a hand in all of the houses that have gone into Fuller’s Landing. So far, that adds up to nine with dozens more on the way. Fuller’s Landing will eventually hold around 120 homes.

“Everybody should have a home,” first-time homeowner Poe Shee said.

That belief, along with an inspiring work ethic and contagious spirit, make Poe a model employee for Habitat for Humanity.

Justin stated that “Poe, probably more than any other family we serve, has been more engaged just because he is on our team as well. So, he has got to help build every house for every family that’s out here. The comradery he has with our lead volunteers and other families that come out has really just been humbling to see. He’s always smiling. He’s always having fun because he really does enjoy what he’s doing because he knows he’s not just getting a home himself, but he’s serving others that want the same opportunity that him and his family have.”

Poe worked in a Japanese restaurant before he came on board at Habitat. He said this job doesn’t feel like work at all.

“This is a fun day, all day, especially working outside, it feels like freedom,” Shee said.

Perhaps that’s why Poe is always wearing a smile with his tool belt.

“Where do I get this energy from? From the crew workers- they are so nice, so I don’t feel tired at all.” “They feel like family to me,” Shee said.

Poe and his wife have two kids- a six year old girl and two year old boy. After living in apartments for years, the family is more than ready for a permanent place to stay.

“This is our first home, so we are excited, especially for our children so they will have their own rooms. So, it’s just going to be nice for our family,” Shee said.

The Shee Family’s home is the fourth to be completed at Fuller’s Landing, with several more under construction.

“There’s a lot of need in Fort Wayne and Allen County, and Fuller’s Landing is doing a great job serving them – probably one of the most affordable home ownership opportunities you can find. We’re almost finished with our one year of construction here in Fuller’s Landing. We have nine houses that are under construction, four of which are actually now moved into.  We’ll be finishing up five more of the next month or two. Those families will be moving in soon too.  We’ll have those families in by the spring, and then come April, we start it all over again and we’ll build homes for more families. We have thirteen families that are ready for houses this year, but we only have funding for ten. So, we’re working on fundraising. We also have 28 families in the program overall,” Berger said.

The idea of having an entire neighborhood full of Habitat homes is a relatively new concept for the international organization.

“It’s not something that’s brand new, but something that a couple of bigger affiliates have done. Now, we can bring it to Fort Wayne and see what an opportunity it is for affordable home ownership  for families that are low to moderate income. It changes the landscape for what home ownership looks like altogether. So, we’re hoping to create a ripple effect across the community and kind of raise the bar and the standards of home-ownership opportunities and what affordable housing can look like. Fuller’s Landing is doing that thanks to great models like Nashville, Tennessee, where we modeled ours after,” Berger said.

Berger said Poe Shee and his family are an excellent example of what other Habitat families are like.

“Poe’s not really an anomaly. All of the families that we partner with are working so hard to change their life, and change their kids’ lives. We’re really hoping not just to impact the generation we’re serving, but that next generation that says ‘We’re going to get out of this lifestyle, and  we’re going to raise the bar for our own family and our own wants and desires for our lives,’ and set them on a new trajectory, which will be great for our whole community in the long run,” Berger said.

The Shee Family plans to move in at the beginning of March. If you’d like to learn more about volunteering for Habitat for Humanity, or becoming a partner family, just click here.