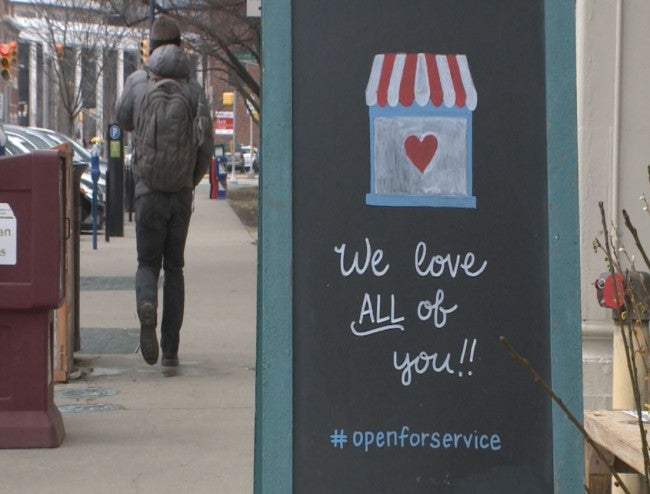 INDIANAPOLIS (WISH) – The “Religious Freedom” bill is on its way to the governor’s desk.

The state senate passed an amended version of the bill in a 40 to 10 vote Tuesday afternoon.

If Governor Pence signs it, like he’s promised to do, businesses are banding together letting everyone know where they can shop.

“I can’t imagine a scenario where I would turn someone away,” said Heather Givans, the owner of Crimson Tate.

24-Hour News 8 first spoke with her two weeks ago. She was one of the first businesses to support the Open for Service campaign

“We’ve had nothing but positive feedback,” said Givans.

The campaign is in response to the “Religious Freedom” bill. Some say the bill is a license to discriminate, particularly against those in the LGBT community.

More than 500 businesses have signed up.

“I would say almost three times the growth from the last week and half has happened in the last 24 hours,” said Josh Driver, the founder of Open for Service.

And they’re not just from Indianapolis.

In addition to stickers placed on their windows, businesses will also be included in an online directory.

The co-sponsor of the “Religious Freedom” bill says it doesn’t allow for discrimination.

“This is not about discriminating,” said Rep. Jud McMillin, the House Majority Leader. “This applies to everyone who wants to assert a religious belief, not just people who practice Christianity.”

Business leaders are also still undecided on whether this could hurt businesses in the long-run.

“Certainly some folks believe that, but I think the answer is, it will remain to be seen,” said Kevin Brinegar, the president & CEO of the Indiana Chamber of Commerce.

The state Chamber of Commerce remains opposed to the bill. They say many of the protections are already in place. Economists also question the bill.

“Most businesses are out there to widen their customer base, not to narrow it,” said Bill Rieber, an Economics professor at Butler University.

Meanwhile, Givans says her openness is welcomed in the community.

“We have led with our positive foot forward and I think that people are happy to support a business that is about building community and that’s what we’re aiming to do,” said Givans.