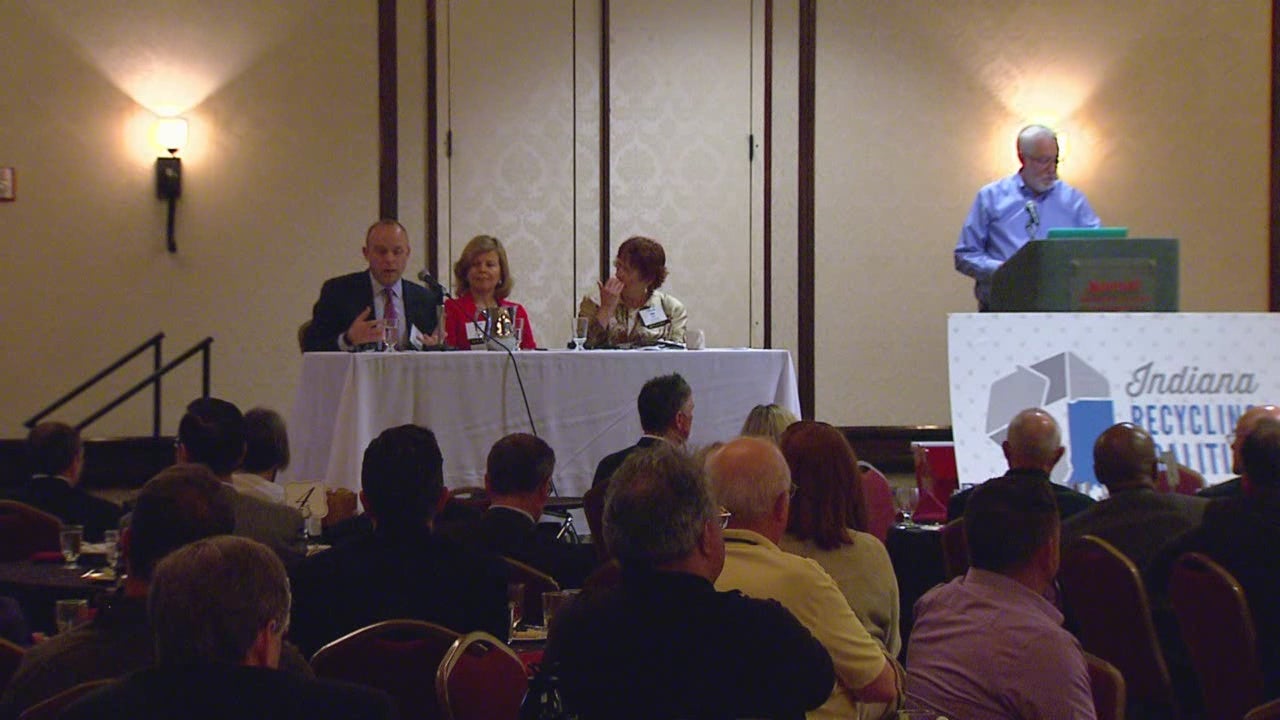 INDIANAPOLIS (WISH) — A controversial recycling contract that seeks to alter how Indianapolis recycles became the focus of a luncheon Tuesday hosted by the Indiana Recycling Coalition.

Carey Hamilton, the executive director of the IRC, said they wanted to use its annual conference at the Indianapolis Marriott East hotel to remind its supporters and Indianapolis residents that the city’s $120 million contract with Convanta was “not a done deal.”

“We took this opportunity with our annual conference in Indianapolis to raise the issue back up,” Hamilton said. “The contract is actually in litigation. Most people don’t know that. So this is not a done deal.”

But the legal challenge ahead could pose some difficulty for those opposed to the contract. Two paper companies and a private citizen lost a lawsuit it filed against the city, alleging that Mayor Greg Ballard’s administration did not “follow the proper procedure” and failed to hold a public bidding process before awarding its contract to Convanta.

The case is now pending before the Indiana Court of Appeals.

“They did lose the lawsuit and it’s been appealed and I would say the lawyers are hopeful that this round will be successful,” Hamilton said.The controversy centers around a deal brokered by Mayor Greg Ballard’s administration with Covanta Energy, which currently operates a waste processing facility on the city’s south side.

Covanta officials told 24-Hour News 8 Tuesday that it is currently seeking construction permits and could have shovels in the ground by the end of year.

Its plans call for building a recycling facility that would allow Indianapolis residents to throw out their recyclable materials and their trash all at once. The company even posted a YouTube video explaining the streamlined process by which recyclable materials would later be separated from the trash.

But the plan limits which items will be recycled. For example, glass and certain types of plastics will not be recycled and could end up in the landfill. And all recyclable materials will be co-mingled with trash before they are sorted, leading recycling advocates to dub it “dirty recycling.”

“That’s true. But we are recycling almost all things that could economically recycled. So if we can get a paid for a certain commodity, then we will recycle it,” said Covanta market area vice president Scott Holkeboer.

When asked what it would take to recycle glass, he said “quite frankly, if someone would take glass for free off my hands, we would do it right away.”

“The reason IRC came out in opposition to Covanta is because the recycling industry opposed this proposal to mix recyclables with trash,” Hamilton said.

“It’s not (dirty). We are using the most hi-tech technology. It’s supposed to be the most hi-tech of its sort on the planet,” said Scott Holkeboer with Covanta. “We use technology – what we call is a positive sort. So what we do is we take out the clean recyclables from the waste stream as opposed to a typical dirty MRF where they pick out all the trash.”

City Councillor At-Large John Barth, (D – Indianapolis), said he is concerned with some of the incentives in the Covanta contract that might penalize taxpayers if Indianapolis were to increase its own recycling efforts. He called it a “perverse incentive.”

“If the city of Indianapolis does better at recycling, we have to pay Covanta up to $4 million a year,” Barth said.

But Holkeboer disputed that in part, saying “that’s not exactly true. They would have to recycle every piece of trash that they now produce to get to a number like that.”Reporter note: A Ballard administration spokeswoman did not respond to repeated calls for comment until after our story aired. Jen Pittman did respond eventually by email, stating:“City representatives met with the IRC many times when recycling options were being studied. In fact, the IRC was invited to submit a proposal in 2014, but the organization never did so.  Covanta’s advanced recycling center is an important piece of the city’s recycling efforts and will allow us to offer recycling services at no additional charge to residents throughout Marion County.”