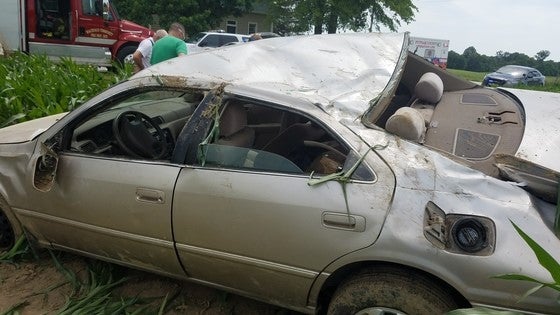 The boy became trapped under the gold 1998 Toyota Camry, said a news release from Sgt. Joe Watts of the Greencastle state police post. The crash occurred about 3 p.m. in the 5000 block of East County Road 900 North, about 2 miles northeast of Bainbridge.

A preliminary police investigation revealed the Camry was westbound on 900 North when the boy lost control on the gravel surface and traveled off the north side of the road and into a cornfield. The Camry rolled multiple times.

The boy was taken to Hendricks Regional Health in Danville for treatment of life-threatening injuries, and later was airlifted to St. Vincent Indianapolis Hospital, police said.

A 17-year-old boy and a 16-year-old boy were passengers, the release said. Both wore seat belts and reported no injuries.

The release did not provide the names of the three boys.